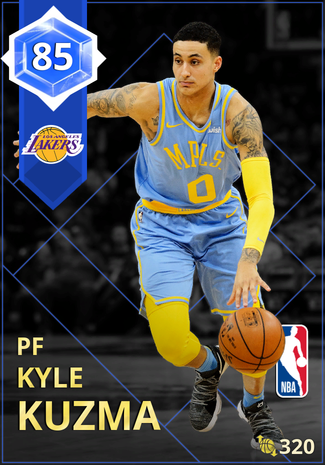 Leader Off the Bench

Kuzma was highkey the biggest draft steal of the last 5 years.

Kuz is only getting better too

when your quik maff is too quik

Not right now fella, but he will be.

why are you booing me i'm right

no. People say the same thing about Draymond when he was a rookie. Give Kuz time to become a star.

very very different. draymond is a top 5-10 most important player in the league. and draymond always had a winning pedigree - he won in aau, he won in high school, he won in college, and he always did whatever it took for his team to win. he also had outstanding defensive tools - massive wingspan, quick hands and feet, strong frame, and he was always intense and locked in. also was always a great passer. kuzma has one noteworthy tool - his scoring ability. he's a very good shooter and finishes well around the rim, even if his shot selection is iffy. but the thing is, kuzma is an atrocious defender with very limited defensive tools and upside. he's a bad rebounder for his position, and is a pretty pedestrian passer. and there's also a big time difference in their stories. draymond only got 13 minutes per game as a rookie and played horribly in those minutes. i think we're seeing right now what kuzma is capable of, and that he has a very limited upside. he's a high floor, low ceiling player. he has no length, average athleticism, average frame, and most importantly, he doesn't have any defining intangibles like draymond that could launch him into stardom. kuzma is gonna be a solid player but he won't be a star. if you use that logic then why not just hype up every late pick that plays decent as a rookie?

Exactly. He is a rookie, 22 yrs old but still its his first year playing in the NBA. He has already established himself as the 2nd or 3rd scoring option on his team while coming off the bench for a bunch of games. He needs to add some weight to be able to hold his own on defense downlow but the comparaison with Draymond is unfair. Its like comparing Kobe with Tony Allen. Kyle reminds me a bit of Antoine Walker and he might need time to fully develop. This is way wayyy to soon to make any prediction. Lets see how good of a player he will be in 4 to 5 years (prime years). He can realisticly be a 22 and 8 type player with range and ball handling skills which might land him in the ASG a couple of times. And btw Draymond is a bit overrated, trade him to any team other than the Spurs r Rockets and he will struggle.

i'm not denying that kuzma can be a good player. his frame is solid, but his physical tools don't really allow much defensive upside. he has a tiny wingspan and isn't particularly quick, doesn't really show any special instincts or toughness. he can grow out of being a liability on that end, but don't think he's ever gonna be a significant defensive plus. that kobe-tony allen analogy might be the worst i've ever heard. they're two vastly different players, let's leave it at that. i do like the antoine walker comparison, although i see more rashard lewis in him. i think kuzma will probably end up scoring around 15-20 consistently, but he won't be a huge star or anything. his upside really isn't that high; he's a high floor, low ceiling player. i also don't think draymond is overrated at all. maybe he wouldn't fare as well on other teams, but does that matter? draymond is among the 5-10 players in the league that help their teams win the most. he's the best all-around defender in the league, one of the best passing bigs ever, and just a true winner. kuzma's ceiling is a borderline all-star; draymond is a blue collar, dirty work superstar

Ok so let me explain it a bit more for you. The Kobe-TA comparaison was on point to show how stupid it is to compare an offensive minded ROOKIE playing on a below average team to a 6 year pro playmaking/defense monster that has been playing on one of ,if not the, best teams ever. By your premise (half of a rookie year shows what a player is trully made off) then guys like Jimmy Butler, CJ McCollum AND your dear Draymond would be labeled as trash and Tyreke Evans a HOF.
Give Kuzma time man, he is on a team where half his teamates will be gone come next year. Draymond has the insane luxury of playing with the top 3 shooters in the league... Even I would average 8 dimes playing in that system with the kind of space created by Curry and co's range. His defense will always make him an impactfull player but trade him to a lottery team and he will struggle to make the top 50 players list. He is a bonefide Dennis Rodman with better playmaking and less rebounding skills. Anyway stop judging a guy based off 60 games. You can never measure his commitment to the game or desire to get better. Get back to me in 5-6 years to be able to fairly evaluate him lol ;)

listen, im not saying there’s no way kuzma can become a stud. it’s possible, i just don’t think it’s particularly likely. sometimes players come out of nowhere, but it’s not all that often. you used bad comparisons too. jimmy butler proved himself as one of the league’s better perimeter defenders by the time his rookie year was up. cj mcollum always had a flamethrower for a jumper, a good handle, and great scoring instincts, he just couldn’t piece it all together until his third year. and then draymond has always had two things: a winning pedigree and elite defensive tools and instincts. they’re very different from kuzma. they all clearly had a ton of upside in things such as physical tools, intangibles, etc. kuzma i think is giving us a good showing of his future right now. he’s a solid, safe bet player, but simply doesn’t have the upside that the nba’s superstars have. for one, he’s an atrocious defender. i really don’t see that changing much either, because as i said earlier, his defensive physical tools leave a lot to be desired. kuzma really just doesn’t have that one transcendent skill or feature that will allow him to score consistently against the nba’s better defenders, or dominate a certain aspect of the game. look at all the current nba stars, they all clearly had those skills in their bag right off the bat. cousins, ad, kd, lebron, kyrie, aldridge, beal, drummond, love, oladipo, porzingis, wall, westbrook, curry, embiid, horford, lillard, and towns were all studs pretty much the moment they stepped on nba courts. all of the others have some elite skill that they clearly had early on in their careers, except maybe lowry, who was a defensive stud at first, and dragic, who had always shown flashes of elite quickness and finishing abilities off the bat but didn’t put it all together for a few years. also, im not even a draymond fan lmao. he’s a shitty guy, just an incredible player. also you wouldn’t average any assists in the warriors system lmao, much less 8. if it’s so easy to average 8 assists a night in their system why is draymond the only one that does it?

JESUS this card is insane. The stats look more like an amythest

what do intangibles do

If it's a 25, that'll show the lowest overall rating that this player can have without any other attribute or vital being changed. 99 intangibles gives it the true rating, this card is probably an amethyst in actuality.

As a lakers fan im so glad he is the future of our team. Kuz is a stud

Soon, this card would be in part of "Season Elite" like last year

this card is fucking insane DAMN

THIS CARD IS FIRE

One of the best sapphires in the game

why he look like he got drawn on eyebrows?

Fun fact: this card has more atributes than PD Yao

the. card is really a 90 overall lets be honest he isn't a pf he's a sf if you go to myleague and change his position he goes from a 79 to a 83 for his actual rating and from a 85 to a 90 with this moments and if you bring up his intangables from a 40 to the 80s he becomes somewhere in the mid 90ss

Lil B boutta curse his ass. Here we go

Classic case of going from underrated to overrated...Coming from a Laker fan... I just hope he turns in to even half the player Laker fans are expecting right now...

Not really that different from the emerald

uh actually it is. 2 more badges and over +100 for total attributes..