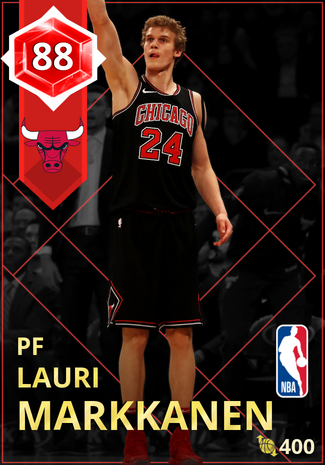 One of the best arising young stretch bigs in the league - not only can he shoot - he can drive to the bucket and posterize people, as well as being a very solid rebounder. Extremely promising young Bull!

he dunked on Kanter...

Yea but only got a 35 contact dunk r.i.p. kanter he also did a put back dunk on someone this year i forgot who

That topo as well

Ima Knicks fan and I like Kanter, but the fact he got baptized by a rookie shows how bad he is on defense

Kanter is god awful at defense.

How bout compare him to Nowitzki, cause he also gon be an all-star

i dont think anyone thought zach collins was better

so you get 7 votes for copying me comment? yeet

Postered the shit out of Kanter and gets 40 driving 35 contact...

He is now the franchise player on the bulls, hope the bulls get better when LaVine plays

Wayyyyyy too early to tell

Exactly why it's way too early to say "no" as well. Like I don't agree or disagree with either of you because I only clicked on the link to see how this card is.
However, to respond to him with your own opinion with a reasoning that disproves your own theory it makes you sound contradictory and dumb. You can't say his "yes' answer is faulty because there isn't enough information and it not also making your "no" answer illegitimate.

Y'all need to do your homework and stop playing video games as much.

I'm screenshotting this because you gonna be right

White boy got some skills

He Finnished the Knicks with 33

You kids make me sick

When nobody knows who the fuck you are and you drop more numbers down than the hyped up lonzo ball player that everyone knows.

I keep thinking he is a center...

That doesn't need to be stated because its obvious. Im just saying he is potentially another Dirk in the future, a good European PF

Please stop. Dirk is a legend who exposed KG's and Duncan's overrated defense. Something Mauri could never do

Did you read the word "Next"?

Duncan was never a bad defender against bigs, only time he slowed down on defense is when he got old just likr now look at dirk he doesnt play harf defense cause of his age

And yet, he once again proving that he's the Franchise player for the Bulls

99 block ball back into curry's face

We gonna look back on the 2017 draft in 15 years and realize that the Minnesota-Chicago trade was the worst draft night trade in history if Lauri keeps doing shit like this.

Nah the Wolves are 3rd seed in the West

As a rookie, this man is going OFF this year

88 potential?? Thx 2k, another USELESS CARD bc you refuse to increase potential ratings!!!

why'd you delete your comment it was pretty funny lol.

The response I was getting was pretty negative.
To not bother anyone else with my ideas on how to rebuild the bulls I decided to delete it. :)

Lmao when did the Bulls front office make a 2kmtc account

We made our account earlier this afternoon. @posthert We thank you for your input. It is still meaningless to us

Jesser is that you?

stop talking to a 2k card on your screen

I doubt he will have much success in the league because he is a seven-footer who shoots 42% and 36% from deep, yeah he scores a lot but at 7 feet tall, you cant shoot that bad.

What logic is that? Seven footers used to shoot much more efficiently only cause all their shots were in the paint and in some cases from midrange. But that does not apply to Markkanen at all. If you shoot from everywhere you should be judged just like any other shooter. In the present league, it's just stupid to assume a guy should shoot insane percentages just because he's 7 ft.
Also, dude's on a pretty bad team and he's a damn rookie, just give him time. To be honest he's one of the best rooks so far. He can be pretty good.