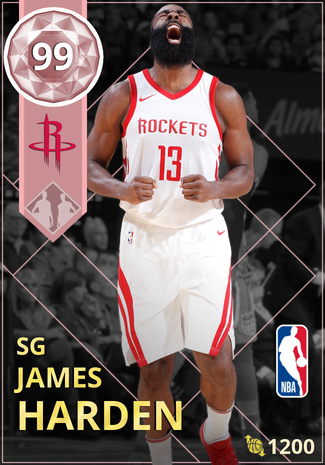 I know, I know...more jerking off over PD Harden. Sorry. Sort of. I don't want to rehash how idiotically incompetent/sloppy/lazy 2K is. They are. Not going to talk about how fucked up and unfair the PD Harden glitch is. It is fucked up, and it is unfair. I don't care what 2K should do to fix this, or what players should do to protest this. 2K won't do jack; not even admit a mistake was made. And what players should do is up to the player. Good luck with whatever you decide.

This is a P.S.A. for any players who intend to keep playing MyTeam, who don't already have PD Harden, and are debating whether or not they should do their best to get him. And my advice is: get him. Do pretty much whatever you can do to get him. He's probably the best offensive card in the game right now, regardless of price. He's definitely the best card in the game, with price considered. And both these statements are likely to remain true for the rest of the 2K18 cycle.

He has zero weaknesses and is just a sliver shy of perfect in pretty much every conceivable way:

There's no card that is as good and as relatively cheap as PD Harden. Even the ones that are multiples of the price are not as perfect as PD Harden is, offensively.

If you don't already have PD Harden, but you have assets that you could sell to afford him, then sell that shit so you can afford PD Harden.

Aside from a very small handful of super-ultra-rare PD cards, nothing else auctionable is an endgame card. Most will only go down in value. PD Harden is, and will always be, one of the top cards in the game. If you have 50K MT and have decided to pass on PD Harden because you refuse to sell Diamond LeBron, Diamond Klay, Diamond D-Rose, Diamond Ray Allen or whatever the fuck, you will regret it.

Will PD Harden Get More Expensive, Or Cheaper?: I.D.K. but I.D.C.

I have no idea what has been going on with PD Harden's AH value on this second day of the Hardengate era. But I don't really care. If I end up having spent 100K too much, I can make up that 100K by being a no-life schmuck and snipe spam AH refreshes if need be. But if PD Harden were to have gone up in value, and got too high for me to afford before never coming back down to upper-middle-class affordability, then that's not acceptable.

And I'm not even a Harden-playing sort of guy. If I had my way, I'd get Diamond Payton and call it a wrap on point guards for the year. Lock motherfuckers down, then post-up on them and rip post-fades while fantasizing about GP yapping about taking their trash-ass game back to the J.V. squad. Or dance around with Curry and bomb shit from the edge of the halfcourt logo.

But this is 2K18 and that shit is not the shit to do. The shit to do is batter your way into the paint and either launch into an OP contact dunk animation, or rip into an OP snatchback jumper animation, or fling a pass into the corner where your OP 7-foot center with 85 Open 3 and Gold shooting badges is waiting to rain unrealistic death.

And, for that, PD James Harden is perfect.

Why this review has 0 likes

The zem effect at full force

Rip to the guy who paid like 1.5 mil right as the glitch was happening.

Yo this is a great fuckin review brother!!
I was at work the day Hardengate started; as you so perfectly coined it lol when i got home, I wasnt aware that 2K glitched the packs or whatever tf happened..
So when I saw PD Harden for 300K MT (which I have been saving since literally day 1) I immediately emptied my MT for him... You think I paid too much?? Also I have a Diamond adidas shoe card, basically all for defense--prob the only diamond card worth applying to him right??

FYI, I didn't coin "Hardengate." I saw it for the first time on this forum, though. I think.

I think 300K for one without a DI Contract or Shoe is high, but I think it's going to turn out fine. I bet, at some point, you will definitely be able to sell him for at least 335K, so even if you just park your MT for a while, should turn out at least neutral. You cannot say that for the vast majority of cards.

What boosts does your Diamond Adidas shoe give? I am always all about boosting D, so I would probably use that on Harden, but it depends on the specific boosts.

The other things that one might want to boost on him are:

- Strength from 80 to up to 89 would be nice. Aside from defensive boosts, this is the only other one for which he could use ALL of a +9 boost.

- Speed w/Ball from 95 to 99 just to max out, and also maybe also max out Speed and/or Acceleration.

- Max out his rebounding, or close to that. With his Rebounding ratings, Vert, and Strength, he actually is nice on the boards.

Is it worth the upgrade from the diamond one?

It is, insofar as any jump up in tier is worth a multiple of the price of the lower tier card.

i think James harden will be MVP

Didnt u just post this in the myteam forum? Lol