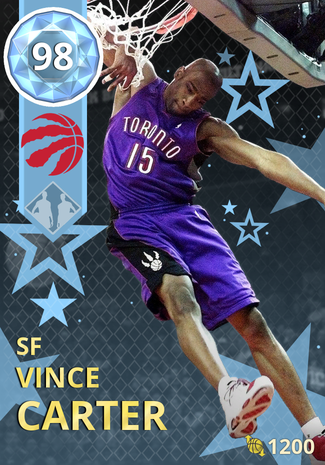 I was stuck between buying this card or diamond wade. I chose this card because of the shooting and I wasn’t disappointed. His shot is smooth, he’s quick, and he’s great at attacking the rim. If it’s not a poster dunk then he’ll most likely still finish the contested lay up.

I used Vince at the 2 and the 3. My line up is: Diamond Stephon Marbury Diamond Vince Diamond Lebron Amethyst KD Diamond Shaq

Vince fits in perfectly for me. I run a half court press with the guards switching everything. He does fine. On offense he’s a bucket getter. no complaints.

Use if: You want an athletic playmaking player who can also shoot and defend.

Don't use if: You’re not a big baller

Bottom Line: He’s one of the best cards I’ve ever had. If you can afford him, get him. You won’t be disappointed.