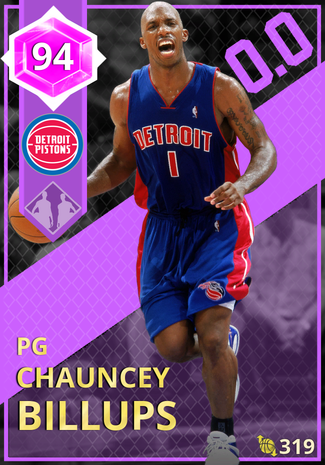 When I saw this cards stats, I had to pick him up based on his shooting and defending. When I entered the game however, I found this card almost unusable. His release might be the slowest in the game, and even if you get space, the defender will come back by the time the ball is our of his hands. His lack of a drink hinders him going to the basket, having trouble finishing over larger defenders.

-3pt shooting-If you can figureout his terrible, slow release then he'll make shots. When open he will always hit because of the attributes.

-Defense- Billups athleticism and defending stats and badges make him a very good defender. You can easily stay in front of your man. Off balling is effective as well.

Athleticism- He is very fast with and without the ball.

Weaknesses: Release- As I said previously, Billups probably has the worst release in the game and it's very hard to learn. Greens are almost impossible and you have to create an absurd amount of space to get off a clean shot.

Inside Scoring- Billups struggles to score inside because his small size and lack of dunking ability. He will finish some layups, but is wildly inconsistent.

Recommended Strategy: Catch and Shoot, Try to create spavery, and pick and rolls.

Use if: "You want an defending playmaker"

Don't use if: "You need to score inside and pull up in people's faces.

Bottom Line: Decent value for building up your team.

His release is slow but it’s cash money for me. But it sounds like he’s your primary scorer. I finished the collection so I start him with kd and Hakeem but when he gets decent looks he knocks them down.

The release was interresting for first. But for me the main problem were the turnovers. Somehow it was really easy for the opponent to steal the ball from him.
Since the first match I play him at SG. Its not the best card ever, but usable.

True, in fact they both suck. They can only play defense and pass. Both of them have terrible layup animations and that makes it really difficult to drive to the rack with them, so you basically have to wait for the defense to collapse and pass it out on the perimeter. If the defense doesn't collapse, you're fucked.

He draws so many fouls for me.

THIS!!! I felt exactly the same as you did! He can't run the offense for a team, and he can hit shots only if wide open. He has great defense though, so he is only useful as a 3&D point guard, but requires you to have another elite handler on the court at the same time: LeBron, Giannis, and so on..
I have Rick Barry who is a great playmaking forward and he runs my offense when Billups is on. That's the only way you can run him.

He is the same player as Jerry West imo, and they both suck.