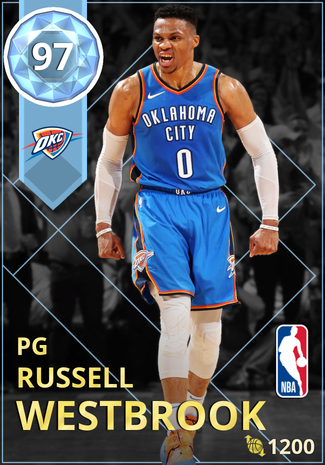 Do it all point guard

I've been hoarding my for a long time through domination but I finally had to spend a decent chunk of it on this card. It just looked too insane and fit my lineup perfectly, and I can say I have no regrets.

The bottom line is the card is one of the best in every category besides shooting the three which he still does competently. A fastbreak possession will have 5 plus hall of fame badges lighting up for you and he will get you a bucket on the break everytime. In the halfcourt he is one of the best playmakers in the game and using his athleticism and playmaking to penetrate and break down the defense is easier than any other card I've used before. On defense he gets multiple steals a game and is surprisingly good at getting blocks, especially chasedown. It is also easy to use him as a help defender because he can get back to his man so quickly. This card is just all around insane.

Weaknesses: None really. He isn't going to shoot the three like the new diamond lillard probably does, but he can still drain it and everything else he does is off the charts

Use if: "You want an athletic playmaking point guard that can do it all on the offensive and defensive end"

Don't use if: "You want a card with hof limitless or don't have the mt.

Bottom Line: "the ultimate jack of all trades."

Have you used the diamond Oladipo, and if so, how much better is this Westbrook? How do the 3pt shots compare?