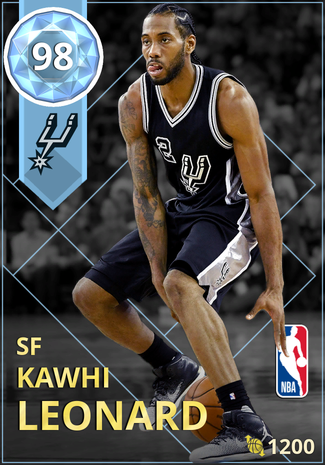 Being a Spurs fan once I saw this card I felt it needed to be seriously reviewed, it is absolutely insane much in the same way he is on the NBA court. This is my first attempt at a review so please don't go too harsh on the comments but any helpful advice would be greatly appreciated.

Recommended Strategy: Use him to guard the best player on the other team, no matter the position. Can make a living from behind the arc and in the paint so pull up shots and driving 1 v 1 are constant options. Would shine when running plays as the receiver and would do well as the screener in pick pop/roll game.

Other Comments: Could do well starting in the PF position with more than capable defense to lock down any 4, whilst giving a shooting and athleticism advantage.

Use if: You (like everyone else) needs someone who can do anything.

Don't use if: You don't want talent on your team, or you are a Warriors fan who hates challengers to their ring monopoly.

Bottom Line: A great player to build around who would benefit from playmaking support in the 1 and 2. He does anything you really want from a SF and can match it with the best of them on offense, while completely shutting them down on the defensive end.

Great review. Definitely the best two way player in the game in my opinion. Hopefully he comes back strong next year.

Thanks for the comment. I'm really hoping he comes back with some fire. I wish he will patch things with the Spurs but I hope he does well anywhere he goes.

What is his price currently

Excellent review. You should do more reviews. There arent enough people doing honest and well thought out reviews

Thanks, its great to see people appreciating what I posted. I'll try and do more.

Kawhi can't even shoot in real life. and ive never seen him shoot from limitless range. this card is bs

Kawhi's 3-point shot is now pretty reliable however, you're right in the fact that he doesn't shoot from really deep range.

And he didn't even play. He got a diamond playoff card without playing in the playoffs

It's a throwback playoffs card.