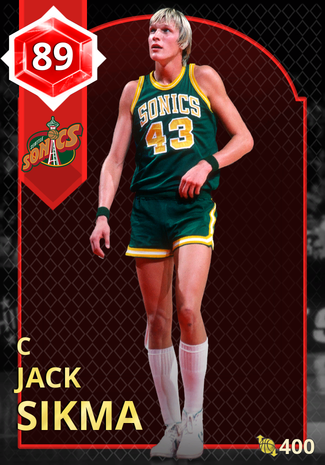 It's still early on in 2K while I'm writing this review (11/29/17), but I had to mention how nice this card is. I've had ruby Cousins for a while, and though he is a great card, this Sikma (while having less stats) caught my eye. Great stats and low cap? I knew I had to get him. A few games is all I need to be convinced that this Russian (heh, cuz he's red) is a top tier player.

Bought for: 45,000 MT (Feel free to call me a cuck if his price radically drops)

Recommended Strategy: Catch and shoot, feed him in the post (once in a while), use him for pick plays of all kinds, send him to the paint, keep him out on the three point line if he has giant Bol like centers, mid-range spot up.

Other Comments: Small bug in this card. If you give him some aloe for his sunburn, he'll evaporate and be whisked back to the auction block. Don't test him.

Use if: You want a standout big man with above average height, great defense, powerful inside play, and a sexy shot.

Don't use if: You wanna spam the fucking pro stick and throw a flashy dime with your center (Try the future diamond Jokic (I bet there is gonna be at least ONE)).

Bottom Line: The redder the skin, the more the shot goes in. 45k is a little steep for a ruby right now, but this beast is a monster on any team (atm), and he's worth way more than his price.

hes 5k on pc
Can defend strong C's or does he get pushed around?

He is a great defender for me. Shaq might give him a small amount of trouble, but normally he’s good to go.

This review is the best I've ever read!

Too kind lol. Thanks for the feedback.

yo mamba wanna do a draft challenge whoever gets the best draft. The loser has to give the player 10k Myteam coins on the ps4
U in or naw

bro if u ain't gonna make a comment bout the review or ask about the card then at the very least ask the guy under his comment.

Well that is SHOT CLOCK CHEESE