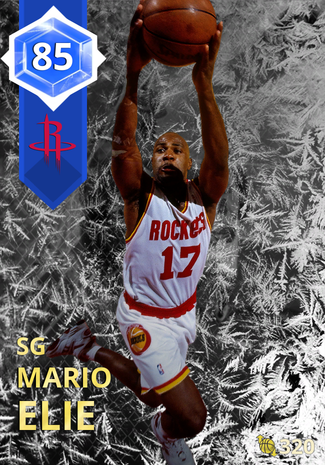 So, I picked up this Mario Elie, and this card is a budget baller. I put him in another lineup and he dropped 38 points. I was like, man this guy might make my team. So I tried a few more games with this card, and every game he played, he always dropped 30+ points. I didn't know who to replace with him though. So, I was like who should I replace him with. And then I was like, I'm going to sell my ruby Oladipo for 25k. And run Elie off the bench. And guess, what? Elie led the team and got me to the amethyst league.

Recommended Strategy: "I use a nice strategy with Elie. I know Elie is a nice mid-range and three-point shooter, so I first pass it to my center, so all the defenders go to my center, and then my center passes it to Elie, who is wide open for three, and a perfect release, green release, and knocks down the shot, getting it to drop."

Other Comments: (optional) "I run him at shooting guard because he can shoot the mid-range and threes."

Use if: "You want a budget baller that can shoot."

Don't use if: "You need a budget baller that can rebound better and play defense better"

I can't get his shot down for the life of me