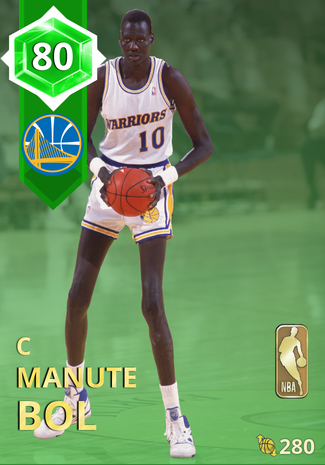 Too many people are discouraged from picking up Bol because they're under the impression that he's weak and slow. Both are true, but the strengths outweigh the weaknesses. Emerald Manute is a great card to buy early in your MyTeam career because he's an elite shot blocker who locks down the paint, allowing the rest of your defense to focus on allowing less perimeter shots. Personally, I started him over Gold Dwight Howard for the first half of current domination, used him as a second string center all the way through some of historic domination.

Bought for: A few thousand MT

Manute's weaknesses stick out like a sore thumb on paper, but they don't affect the gameplay much if you don't let them. He's slow, but he doesn't need to be fast to fit into his niche. He can't pass very well, but that just means you shouldn't throw half court bombs to someone who beat their defender. He isn't strong, but strength is rarely needed if you don't post up from mid range and instead do it much closer to the paint. He doesn't have very good hands, so if you pass him the ball while he's running, cross your fingers. Also, I should note that using him to set screens isn't as effective as an average center.

Recommended Strategy: There were some times when I would run my offense through Manute. Don't do that. He's a strong presence on all defense, especially in the paint. If you play on-ball defense, do that. If you don't and you prefer to let the AI do its thing, then by all means, go ahead. He still gets plenty of blocks as an AI. On offense, you can feed him the ball in the post and go for a hook or drive for a layup. If you drive and get the animation where it looks like he's stiff-arming his defender, then it's basically fair game for a layup or dunk, depending on the help defense that comes.

Use if: "You want an extremely strong defensive presence that can lock down the paint, with moderate offense"

Don't use if: "You want a center who can shoot reliably, one who will speed by their defender frequently, one who can catch and make tough passes, or one who will surprise you with dunking abilities"

Bottom Line: Manute helped me get through like half of domination, and shut down some of the best centers in the league, forcing some teams to resort to their mediocre outside shooters, which can easily be shut down. He's a good value for the MT and more people should be using him to get them through at least current domination.

Domination can get boring and repetitive sometimes, but Manute Bol can bring some life to the party. Blocks are hype, and it's hilarious how he looks sitting on the bench or standing next to other players