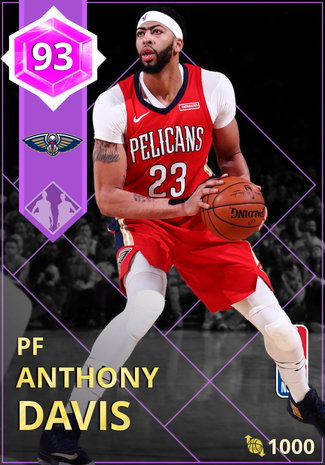 Ok, so before I start this review, I'm going to have a basketball chat, so if you want to be in my basketball chat, then just say I'm in the comments section, and I will add you into the chat. So I saw Davis and I was like, can't wait to try this card out. Bad news, I got this card for 250k. Davis literally wasted all my mt. I put him at center and got into a supermax game and Davis was putting in work. Davis was making mid-ranges, threes, contesting and blocking shots, rebounding. He was unstoppable. And Davis giving us a victory, and putting on a show for our team.

Recommended Strategy: "What I like to do is just strip your opponent and just do a crazy dunk"

Other Comments: (optional) "He gets more boards at center, he gets more points at power forward."

Use if: "You want a beastly forward who can do it all."

Don't use if: "You don't want to waste so much fuckin mt."

Bottom Line: "A very, beastly card on the court."

Yeah. I did it myself just now, was about to correct to 208.

How does this have so many upvotes lmao

You just pissed because I told you to stop renaming the chat.

Yeah I'm so pissed about that

hey, I'll give you a chance to come back to the chat. YOu don't have to, but if you want, I'll add you

and me please @warp

I'm in it and trolling strong

It's fake he said he put Davis at center and but how his center get the board and pass it to Davis?

No matter how good Anthony Davis is, he can't pass it to himself

At this point, I only come in the review to down vote all of warp's stuff.

Bruh if Warp writes the words "Davis" or "My opponent" one more time...

THIS IS NOT A REVIEW> YOU ARE JUST STATING WHAT HE DOES IN GAME. WE WANT TO KNOW WHAT HE IS GOOD AT MOTHEFUCKER

He don't have the card

"Davis was showing more mercy to my opponent." LMAO... Man I heard about you. This sounds like the fakest fiction I've ever read.

How many times did he write Davis? LMAO

Warp the type of guy who only does reviews on players he doesn't have LOL!

Tho everybody knows that he is a troll he spends a lot of time on these fake reviews. I only have to click once for a downvote while warp writes those damn long fake articles. Warp only trolls himself with this waste of time.

True. But I still dont understand why people need to troll. So much wasted energy

to piss people off
it's fun

I'm in the comments section.

Add me to the chat sir,

The problem is that I think he's not a troll. He just tries to get upvotes on fake reviews tht he makes off stats.

lmao if he was trying to get upvotes he wouldn't make these reviews anymore since he gets like 30 downvotes a review. He's obviously just trying to get a rise out of you guys and he clearly doesn't care about votes since he's fine with making these reviews that automatically gets a bunch of downvotes

good review, seems like a worthy upgrade from the ruby but I learned my mistake before and in a few days it'll be like 50k