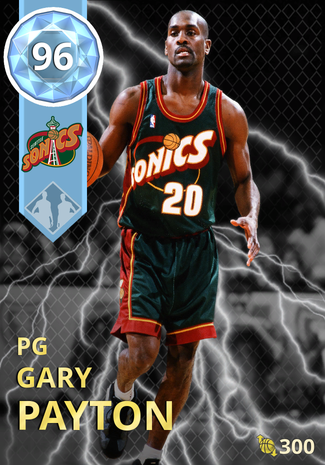 Ok, so after that Curry gameplay I was so pissed I sold diamond Curry because he gave me a fckin L. So I had some VC and saw these new game changer packs. I decided to just waste my VC and I heard people say to stay away from these packs because you get sht from them, and I wanted to see if that was true. The first three packs, I just was getting bronzes and slivers, and on the fifth pack, I see a diamond flash, shaking on the screen. I was hoping for a diamond Ray Allen because he was one of the best three-point shooters in the game. I flipped the card, and I flipped the diamond, and I saw a number 20 Gary Payton. I was a little bit disappointed because I wanted the Ray Allen, but I was also happy because he could take a spot in the starting lineup at the point guard. I finished off the box and I was like, if this card doesn't play at the expectations, I would sell him. I got into a supermax game and my opponent had a full diamond starting lineup. He had diamond Curry, diamond Kobe, diamond Lebron, amethyst Malone, ( the duo turns him into a diamond ), and finally, the diamond Wes Unseld. The good thing was we were at home. And Payton lead the team and got us a W.

Recommended Strategy: "What I do with Payton is I just do a crossover, and then I step forward, then step back, and shoot the three-pointer, and it goes in."

Other Comments: (optional) "Run him at point guard. He get's more threes."

Use if: "You want a defensive, three-point shooting, point guard"

Don't use if: "No reason not to use this card."

Bottom Line: "If you didn't get the diamond Ray Allen, get this Gary Payton card."

You’re so annoying. Like you really have nothing better to do with your time then wait for them mtcentral to post cards so you can waste about 10-15 minutes of your life typing BS. Just do it on mtdb, they posted the cards right away. Except you won’t get attention there dumb ass troll

I totally agree with that bruh. My head is giving me a total destruction by looking at this madness

this is the funniest thing on this site in a while. so much irony, even more stupidity. users fell off

But you’re commenting on his review too...?

I highly doubt anyone is actually pissed off. But you must be his second account since you obviously can’t see why people would have a problem with someone writing fake reviews on cards they might want. Keep warp banned foh

lmao people are actually pissed off I've seen multiple people in chats complain about him and how can I be his second account when I'm one of the biggest users on the site, and if you get mad at somebody making a fake review as a joke then you need to calm down

whats wrong with it? this is a very detailed review

It's Fake. Thats whats wrong with it.

I was thinking about leaving 2kmtcentral to mtdb, but I decided to stay.

because you can't write reviews on mtdb

what kind of a roast is that

" So I had some VC and saw these new game changer packs. I decided to just waste my VC and I heard people say to stay away from these packs because you get sht from them, and I wanted to see if that was true." Literally the dumbest thing I ever had heard in my life.

it was dumb because it was supposed to be

Jokes are supposed to be funny & you’re commenting as well so who’s the dumb one here ?

I want to find out. Sometimes things people say are not true.

So you see that everyone says that these packs are straight trash, then the first thing you think it, let me waste my VC to confirm that? Are you made of money bro to just be able to "waste" VC

then how did I pull Payton Bankers

well the thing is you didn't pull him

Ok, first, I knew you wanted me to get out of here so you could live a happy life. But no, I'm coming back. And second, you just want to stop me from making these damn reviews. But I'm going to keep on doing them. And lastly, you just want me to go. But I'm not going.

lol so i could live a happy life, your being on 2kmtc or not doesn't affect the quality of my life at all. Idc if you make reviews as long as you stop making hella fake ones because its super obvious

hell yeah he did

You seriously think that you, a ten-year-old kid who makes fake af reviews on 2kmtc, decreases the quality of my life? You think that I stay awake at night thinking, "I can't believe warp makes fake af reviews. What am I going to do about it, my life is so bad because of this warp kid on 2kmtc who thinks the Lakers should waste players trading for Paul George instead of just signing him." Gtfo

lmao rip warp he got banned

who the fuck banned him tho

Keep making these they be having me rolling Bro your funny asf. Lol fck the haters.

Do you just remember all of these specific moments from the game, are you a super genius?

its comedic how stupid he is

So me and my classmates had to do a make up a dramatic story which included a lot of details in 10 minutes as a challenge. We would then share our story with our class. So instead of actually making a story I just copy and pasted a few of reviews made by warp and my teacher said I did a great job.

Like, in all honesty you should just change your name to "warped" because you should be having that for making these motherfuckin fake-ass card reviews that you NEVER had where people are giving serious headache looking at this

does this kid never lose

how good is mid range

A guy with a 35 driving dunk has no weaknesses, seems legit.

Recommended Strategy: "What I do with Payton is I just do a crossover, and then I step forward, then step back, and shoot the three-pointer, and it goes in."