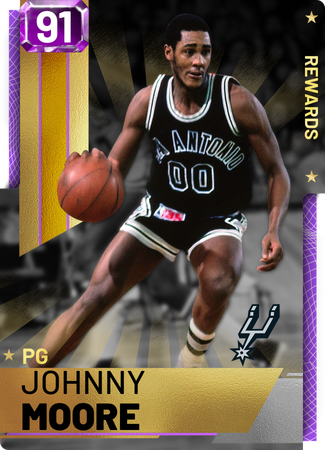 Moore averaged 9.4 points, 7.4 assists, 3.0 rebounds and 1.96 steals per game, and a field goal percentage of 46.0. Moore recorded 20 assists during three games in his career, once during the playoffs, making him one of only seven players to record 20 assists or more in a playoff game. He also had two games of nine or more steals in a game, being one of only 50 different players to record nine or more steals in a game. Just for anyone wondering

basically a Rondo but in the...idk when he played he card date is wrong

Lol get Westbrook then if you gonna cry about it

I got diamond Baron who’s basically the shooting of Curry dunking of WB and defense of CP3.
That’s gonna be a no from me

That’s kinda unfair to compare him to a diamond...for an amythest PG he’s good. Defense is good and he got good playmaking. And the fact that you need a PG to just shoot and dunk tells me the exact kind of player you are. Someone that abuses dunk tendencies and shoots the rest of your shots from 3 and only uses your point guard and no other players

No he isn’t good lmao. Literally Geoff Petrie, Terrell Brandon, and Mike Bibby are all better options on the same board. Lmao if your Pg can’t shoot or dunk then wtf does he do? Seriously this card is useless lmao any other amy, the fact that you use a Pg who can’t dunk or shoot tells me the exact kind of player you are — a horrible one

Lmao, I can make any style of point guard fit into my lineup, but you gonna call me horrible when you need the cheesiest point guards in the game to be good. Lmao dude, you’re a joke

You literally can’t use this card in any way. He’ll get stopped at the rim every time, and no one will respect his range so have fun losing games with this horrible card

Lol if you can’t see the positives in this card than you clearly suck at 2k. I’m not saying he the best point guard in the game. But to dismiss him just because he can’t shoot or dunk is pathetic. I guess you didn’t happen to notice that this is the best defensive PG of the Amythest rewards or that he is really quick with really good playmaking. Nah of course you wouldn’t, because all you care about is jacking up 3s and abusing high dunk tendencies.

This card is bad simply cause of the wildcard badge

Lmao I've learned there's no reason to argue with you, making up fake facts.