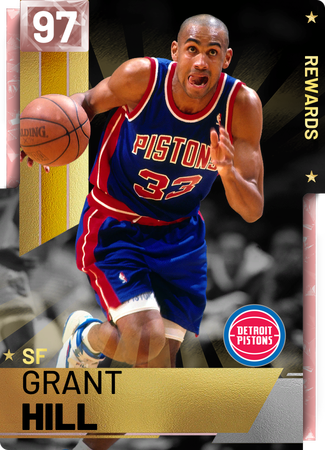 Jumpshot is a little slow, but

This card looks so good, will definitely get him first from the pink diamonds

Yeah me too complete monster with that Tireless scorer and posterizer

just get the new one, its way better

First of all, I got him 7 months ago so I had good use with him. Second of all, I quit MyTeam

6'8 225 lbs and he had a deadly crossover that would give A+ defenders problems. He was also amazing at playing off of a hesitation. Let's not forget how explosive he was. Grant hill was able to elevate out of awkward positions, there's not a lot of guys who can do that. He can do a 360 spin and then jump off of one foot, and he'll still dunk it in your face. He can explode and elevate to the right while his body is leaning to the left. His explosiveness is amazing.

He's also one of the best finishers I have ever seen. He is consistently able to pull off difficult moves while in midair. He'll make contact with his back while in midair, and then extend his arms out to finish. He is able to change the direction of his shot while in midair, very easily. If Grant Hill was never injured he would of been top 10 easily. Unfortunately, he played during an Era where it was acceptable and normal for players to play through injury so they could seem tough. Let's not forget this guy also got more all-star votes than Jordan.

About the more votes than Jordan thing, Grant Hill was really popular back then. It's crazy how fast people forgot about him. I agree, Grant Hill coudlve been a top 10 player ever. I feel like people just forgot that so quickly. Grant Hill has definetley had one of the more forgotten promising careers sort of like D rose and Tmac, except those two I feel are more popular

not as great as you

Way better than Pierce probably the best PD besides Webber, Pierce has 82 speed and 84 Ball Control, WAY worse than this machine

You forgot the best Laker of all time, Jordan Hill

*One who can’t make free throws

I was excited to get his 96 diamond in 2K18 because he was always one of my favourite players but wasn't too impressed. Hopefully this one is better. His dunking and rebounding went down from last year but his playmaking and 3 ball went up

Last year's GH was insane for me ! He dunked on everyone and their mother, for me he was a beast !

I'm not too far from my first pink diamond, but my favourite players are at my 1, 2 and 3 (Baron, Peja, Melo.) Can Hill be played at the 4, or should I move Melo to the 4 and get Grant Hill? The only other option I was looking at is Stockton. Used his diamond as my main PG all through the hardest domination last year.

I went with Stockton who got me over the final Fantasy Domination game. I also got AK47 around the same time, so that athletic wing was kind of filled. Only non-diamond/PD's I'm playing are Klay and Anthony Davis off the bench, but I'm also only about 75 tokens away from Grant Hill. Will grind that out this week. Unless I think Duncan may help me more.

This card is one of the best all around players there are on this game he has a cash release and can defend 1-4 and if you have around 30,000MT points left over it is defiently worth getting a three point shoe

I just got hill and slapped a 3 point contested plus diamond shoe on him. I'm gonna figure him out later today and then add him to my unlimited team.

his emerald is better