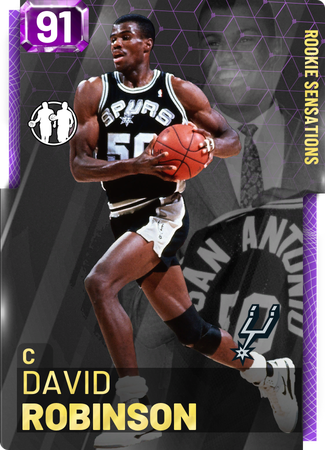 85 Strength, WHAT A DISGRACE TO THE BICEPS

To be fair this is rookie Admiral, but BICEPS

Yeah that’s fair but for real look at the picture, I’m not trying to be mean to you but 2k is stupid to put that picture on a card with 85 strenght

Great player, it's a shame that Hakeem Dreamshaked him into irrelevancy.

Hakeem did not lol. Some of Hakeem’s worst career games were against DRob. The difference was DRob didn’t have the team around him to compete with the Rockets.

Lmao not true...the Spurs were the 1 seed when Hakeem embarrassed DRob right after his MVP season

Hakeem averaged 22-11 with 3.5 blocks v Drob, down almost a point in his averages over that time period. Hakeem only had 10/48 games where he scored more than 30 on DRob, and was held to 20 or less 22 times, including a 6 point performance in 30 minutes during the 92-93 season. 1 series does not define a career.

I mean...it's a pretty important series if I do say so myself. DRob won MVP over Hakeem and the Spurs were the 1st seed. This was one of the two years that Jordan left basketball in the 90s and DRob failed to lead his team to a 'chip but Hakeem did as the 3rd seed.

Looking AT THIS PICTURE, if you did not know him, you would think he was just a bodybuilder posing in a picture in an NBA magazine.

That did not stop Ronnie from giving him 85 Strength.

Should be highest overall in the collection. He had the best rookie season ever.

Duncan Shaq and Kareem were all great too

I like that 2k is starting us out with good cards this year instead of like last year where the highest player you could pull when the game came out was an 86.

without him, garnett would be GOAT PF

I never thougt it that way. Nice one

...DRob played center his whole career and Tim Duncan is the GOAT PF

i meant if DRob didn't teach duncan, duncan wouldn't have GOAT PF because he sucked before the nba

Bro, he went 1st overall though...

Why would Duncan go 1st in the draft if he ducked before the nba?

The year 1992, the place, a small but packed Gym in the Virgin Islands, the event a charity 5 vs 5 pick up game against a team featuring a young NBA star in the making Alonzo Mourning. His matchup was a tall gangly former Olympic hopeful swimmer who’d only been playing Basketball for about 2 years. What proceeded exclaimed by an eyewitness was this skinny kid not only matching an nba star but dominating him. That kids name was Tim Duncan. So don’t give me he sucked before the NBA. In The Admirals own words “when I got to work with him 1 on 1 I was amazed at his talent. I’m one of the best defenders around an you know I couldn’t stop him and it was unsettling to me.” From the 99 spurs championship dvd.

He was far more athletic than this... really fast ...

I mean, you already know we all here to praise dem badass biceps...Caldy nation stand up!

Caldy is beating his meat to this card

One of my favorite players of all time

should have much higher speed, accel, speed w/ ball; he was BLAZING fast early in his career.

This card is overpriced, I can get a Diamond Roy Hibbert for 5k but I need to pay 50k for a 91 ovr?

Navy? Lol isn't that the team that beat Virginia 49-7 in the Military Bowl? Oh, wait

Now we are talking about fucking football?