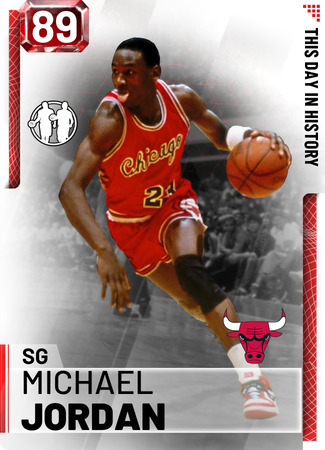 This Day in History

A young MJ who had an amazing rookie season then the next one he only played 18 games due to his injuries and his third year was the biggest bounce back of his career putting up 37.1 PPG, 5.2 RPG, 4.6 APG, 2.9 SPG and 1.5 BPG on 48 percent shooting

I wouldn't say he peaked early, he just didn't have to carry as much so his stats decreased but his efficiency increased when Pippen broke out; due to a lower usage rate and someone else he can rely on confidently. Basically he didn't have to do it all himself anymore

His biggest bounce back was from being trash in '93 to quitting for baseball, that's when he helped the Bulls the most

Kobe sucker who hates MJ? That’s a new one

C'mon, many bronsexuals hate on Jordan

My bad I must’ve been thinking of someone else, nonetheless Kobe without Shaq - no playoffs Pippen without Jordan - 55 wins but still no ring

When she spreads her legs

And i come back and top comments have like 30 upvotes

reply to the top comment next time, 1-up they ass.

You don't reply to top comments, Zem was famous for that.

yea but y'all say im the next zem

cos zem comments a lot, and so do you.

Lol I’m only 15th all time in comments

Yeah i took a long ass break from this site

What do you mean both times? We get 2 tries?

these comments getting worse every year

How did your comment get more upvotes than mine? :(

So he gets more upvotes because he's a moderator, straight bias.

Reason for card: Had one of the most prolific scoring seasons in Nba History. He became the only player other than Wilt to score 3,000 points in a season, averaging a league high 37.1 Ppg on 48.2% shooting. In addition, he also demonstrated his defensive prowess, as he became the first player in NBA History to record 200 steals and 100 blocks in a season. Despite all of this, he did not win MVP.

Can you believe that he did not win MVP?

his team did not succeed so no mvp :(

It’s not for one season I don’t think, it’s for one game

Yeah but Jordan couldn't shoot for shit in his first season and was young and full of energy, we all know Jordan was a far superior player to Kobe anyway.

That proves Kobe isn’t an exact copy, but legit a watered-down Michael Jordan when MJ has better rookie stats than MVP Kobe

So what are u trying to prove here?

Kobe is nothing compared to MJ

Michael Jordan
Is THE GOAT

Dude had one of the craziest rookie seasons ever

He had better stats than Kobe’s MVP year

Yes LOOK IT UP

I mean maybe it would be for them being great dunkers

yeah, that could be the case, or 2k devs were just high lol

Cant believe than MJ torched the Celtics of all teams with 63 Points in the Playoffs but still lost, talk about carrying a team, just an absolute freak of nature

lmfao I missed both

Aight how do I trade my Charlie scott card for him

What the fuck is that three

Looks ruby colored to me

What’s the code? If you know

Thanks I’ll take a look when I play it next

im a idiot then lmao

This Day in History = W

this mj cut is literally worse than my cuts

Barring when he was with the Wizards, there was never a point in his entire career when Jordan wasn’t at least a 90. Still, best of luck to all of you, I didn’t get it, but it looks very fun, especially for TT with those dunk, speed, and defensive ratings!

https://mobile.twitter.com/NBA2K_MyTEAM?ref_src=twsrc%5Eappleios%7Ctwcamp%5Esafari%7Ctwgr%5Eprofile
Not auctionable which is really disappointing. Imagine later in the year when a guy like that hidden fake players PD signature Kobe drops, that better not only be a code..

What do you guys think about my line-up?? https://2kmtcentral.com/19/lineups/21418/the-chosen-one

Omg dynamic duo with Kobe Bryant. Two of the greatest shooting guards ever

When you have 82984MT but the you can buy anything other than packs because you haven´t finished all of the goals ;(

One of the best statistical seasons ever. Some crappy ass players, 3 seed in the east with Zeke’s Pistons and Bird’s Celtics. MVP, DPOY, just incredible. Charles Oakley (12 pts/13 reb), was easily the 2nd best player and also the only other player to start all 82 games. Brad Sellers started 76 of his 82 games and the rest of the starts were divied up between 6 other dudes. Rory Sparrow, a 38 year old Artis Gilmore, Mike Brown, John Paxson and Dave Corzine added up to a load of inconsistency and a bucket of mediocrity. Oakley’s 15.4 PER is the lowest on this list of 2nd best PER on a team. Jordan averaged 35 a game and led his team in fg% despite being the only one who would ever need a double team. 22 year old Scottie Pippen started 0 games and wasn’t nearly the player he evolved into. He won 50 Games in the eastern conference, good enough for the 3 seed and 3 more wins than Stockton and Malone on the Jazz, despite Jordan having no one close to an all NBA level teammate. So why have this 4th? Well, at this point we’re splitting hairs. The team VORP and BPM didn’t stand out as particularly bad when compared to others on this list, and they got routinely taken care of in round 2. The pistons took care of them in 5 games and while still great, he wasn’t absolutely incredible. This will always be on the short list of incredible statistical seasons, not to mention the DPOY and MVP.

this is not the GOAT Kobe is the GOAT

Kobe is about to go up in price.

were is his opal at 2k

deleted because I said "Pippem"

Yea it’s michael Jordan , why does everyone think MJ was a three point shooter?

Brogdon had a better rookie season

Yeah but obviously Brogdon did better because he shot 2% better from the FT line.

Yeah! And he went to UVA so that adds about 50 points to his PPG average

how do i open doors again?

I don't think malcolm brogdon deserved the 2017 ROTY
if he did deserve it, then saric and embiid must have been trash
remember that I said IF

Are you a vt fan

Um! No! My pfp is literally VT losing to ODU

Not even surprised you got banned