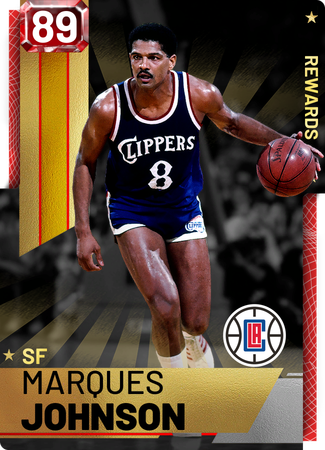 I'm a clippers fan but this is garb

How tf is this a budget card he's trash lol

I’m not the one who made the game and made cards like this useless, I have the diamond and no one guards him, don’t say smh

How is this guy an 89? His stats are horrendous lmao.

So true. I remember watching a YouTube video by a guy named DBG on this last year. Crazy!

where does this card come from

I know this card for Marques Johnson isn't great but Johnson was one of the best SFs in the 1980s when he played for Milwaukee. For those who don't know he was also a member of the 1975 UCLA team the last one coached by John Wooden when they beat Kentucky in the title game.

He also won multiple national college player of the year awards in 1977.

His rookie year he averaged 19.5PPG 10RPG with the Bucks so he wasn't a slouch.

So they are adding to rewards?

Where do you get this card

At least it actually is him unlike the diamond

Wish his diamond got this model. He's a long 6"7