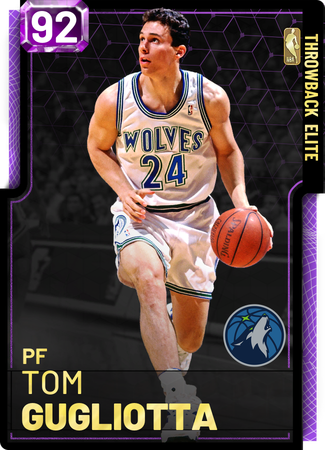 thanks for the information never knew this guy even existed lol

Per 100 possession stats are the most useless stats ever lmao. I’m a Wolves fan but this guy only made the playoffs once with us, the year KG made his first all star game and we still got swept, he isn’t underrated, more unknown, if you know who he tho you don’t underrate gum

This man average 20.6 PPG when was playing for the timerbwolves.


Put some respect on his name.

sorry everyone but who is this

this wasnt even an insult lmao, but saying fuck off I guess implies I was being rude

Still I remember him as a bullet lol

because he is one of the new players that 2k doesn't add to the rosters, like Butler last year.

Because most of the comments here are talking about the player in real life and not in the game, here is my 2 cents. A mini review I guess.

To put it in a quick term, he is Blake Griffin, if Blake was a good, switchable defender that could shoot. Just to put it in perspective, his dunking stats are the best of any player found in the auction house.

He is a very capable shooter with an incredibly fast and high release, very unique shooting form, kind of like a high arching Klay Thompson release, making him lethal in a pick and pop where the defense has little time to recover. Where a guy like KAT will get a "lightly contested" Gugliotta will get "open" mainly because of the release speed. In a pick and roll he is just as good catching a lob or a pass on the sprint with his insane finishing ability and his high dunk tendencies, meaning that he will almost always go for the poster instead of putting up weak ass layups.

Defensively he is versatile, which is super important when you're running a switch defense (which you should all be doing, no offense). He has 76 lateral quickness and a high steal rating for his position, so people thinking they can dribble God vs him because he is big are in a for a surprise. His block is only a 75 but his shot contest, which is a lot more important, is an 86. So what you get is not exactly a lock up defender, but a guy that can guard 1-5 reliably well without being a defensive specialist.

Overall a great addition to any team. I'm not sure if he is worth the 60k he's going for on the auction house because he isn't a guy that gets his own buckets, relying on pick plays and passes, but if you got a lot of MTC and/or you snipe him for <50k, he is 100% worth it. Personally I got BLESSED and found him on the market for 40k which is why I pulled the trigger, but after playing with him in a few games I can say for sure that he's worth at least 50k.

Everyone knows Chris Webber, but no one knows a player that was so highly regarded he was traded for C-Web straight up!

In every single trade that's always the case. One player is better than the other.

Since no one knows who he is can you leave me one at a decent price? Looking for my NC State alum and this is the best I get til Skywalker is released.

Then a storm came in and saved my life

Can you pull him tomorrow or next week?

This guy seems solid. Except for his Playmaking. That could use some work. :)

Nobody is really talking about how good this card is. Put a 3 point shoe on him and he’s an elite stretch 4. Solid defense and rebounding allow with his 6’10 frame. Amazing inside scoring combined with unreal speed for a 6’10 power forward with a jumper. Can’t wait to buy him.

Never seen so many users say "who?" to someone from the 1990s lmao

Casuals only know the stars

This man's a legend people need to get educated

Wait til they throw a Chris Gatling card in there... He also made an All-Star team, but considering he played for like 10 teams, even the youths probablt remember him from when he had a cup of coffee with their hometown team in the late 90's

How much for ps4?

Any Suggestions?
Also have 95K Mt at my disposal
https://2kmtcentral.com/19/lineups/725/current-lineup

Start Isiah Rider now. He's a 6'5 LeBron.(Before someone gets triggered, he has LeBron's base animations, so his jumpshot, dunks, layup, ETC)