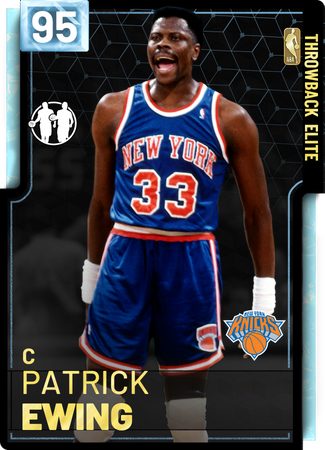 One of the Best

Just a friendly reminder to stay strong during November

thank you. its been hard. especially with kelly oubre's cute ass

I forgot on the first day lol... good luck I guess

Pictures besides this one: exist
2k niggas: this

Fr tho recycling literally the same game, this year there’s just more bs. I got the diamond Curry and used him for a couple of games before selling him back, his best game he was 7-9 from three, GIANNIS HAS DONE THAT ON MY HEAD BEFORE SMFH

"WHERE MY SANWICH AT"?

With high Intangibles, he would've been 96-97 easily

Definitely, and the thing is that I need a new Centre so this is perfect

I need this asap. Post game is back this year!

An Ewing early in the year? This card is going to be nice.

That version had way better stats

do you people actually care about that?

The most underrated player in history along with latrell sprewell

how do I suck? Ewing is really underrated and thats a fucking fact.

you got no lbj with no lbj in lbj goat

Can you please make your sentence able to fucking read?

hell no i aint gay

@KINGJAMES62
you are gay

oh shit look your a rat

2K made this pic bigger than any cards so far lol

Those are some big nostrils you got there

The most underrated diamond center in the game.

When it’s day 7 and u still haven’t nutted, but the hot girl in class is coming up to u

no need to downvote me fag

I’m not saying it’s bad but kids who think there’s a pass are retarded. Either man up and do tho whole thing or man up and admit he it. I’ve lost five times but I wouldn’t make excuses

Makes sense, but yolo. Can’t yeet and repeat until December 1.

I down vote because u didn’t upvote

fun fact: the draft was rigged to get him onto the knicks

When you get outperformed by Ralph Sampson

Zion & RJ > All the UVA players I’ve never heard of

Ralph Sampson is widely regarded as one of the best college basketball players ever. You are delusional

Right because Ewing, Hakeem, Jordan, Worthy, and Drexler were all plumbers.

So Hakeem, Ewing, Jordan, Worthy, and Drexler are bums?

No but people legit saying RJ can transcend LBJ. Ralph top 30 center ever at best

You’re the only person that thinks he could’ve been a top 3 center. He couldn’t have surpassed Wilt who dropped 100 in a game and won MVP in his rookie year while Ralph didn’t make any all-NBA team. Unseld also was a rookie MVP. Definitely couldn’t pass Russell as a five time MVP and an 11 time champion who could grab any rebound, defend better than anyone ever, and pass, even score a bit. By his second year in the NBA Hakeem already had surpassed him as the best player on the team even though Ralph was healthy. Kareem won six MVPs, has the most all star games ever and is a six time champ, and he easily outplayed Ralph every time they went head to head. Shaq came into the league at a younger age and still played better than Sampson did throughout his first 4 years, leading the league in scoring and becoming the only player ever to lead a team that beat MJ in the 90s at just 22 years old. Robinson came into the league and immediately played like a superstar, 24.5 points, 13 rebounds and 4 blocks a game, far better than Sampson’s rookie year.

He was 7'4 with a 40 inch vertical. He had guard like abilities, a nice jumper, and inhuman strength. He was essentially the 80s version of Wilt Chamberlain. And you wanna say that RJ could top LBJ because him and his team destroyed a team that is currently struggling against Southern Illinois! GTFO

“A nice jumper” Think before you speak. Career 66% ft shooter and 15% from three. “Guard like abilities” 3 turnovers and only 2.3 assists per game. He might’ve been top ten but give me your argument for him over Hakeem, Kareem, Shaq, Bill, & Wilt. Literally any one

We're talking about college and not the NBA... After all we're talking an RJ and Sampson debate and RJ has never played a single minute of NBA basketball. What you brought up was that people were saying that RJ was being compared to Lebron and I was saying that Sampson was predicted to be a Top 3 all time center when he was in college (I worded it badly). What I mean by he had a nice jumper and he had point guard like abilities was that he showcased a smooth jumper in college and in interviews he was mentioned to have great handles. Also in high school RJ was a career 58% free throw shooter. You can't bring up NBA career because RJ has never played a single minute. You can't bring up potential because again, Sampson was seen as a basketball god and RJ could bust like shit in the NBA. And you can't bring up college career because it is widely agreed upon that Sampson was one of the most dominant forces in college basketball and a guarantee Top 10 all-time great.

You are the dumbest person I've ever met in my entire life. You claimed that a player who hasn't even played a second of NBA basketball is better than an established all-star at the NBA level. You bring up potential comparisons but no one knows exactly how RJs NBA career will go. He could be MJ with a 3pt shot, he could be an average starter, he could get so injured that he barely plays, or he could bust like crap and become the next Anthony Bennett, no one knows for sure. However what I can tell you is RJ will never have as good as a college career as Ralph Sampson, even if he averaged 30 PPG and stayed all 4 years.

No one said Ralph would transcend Wklt they do say that Zion can transcend LBJ. Since I don’t like wasting my time I don’t pay attention to college basketball

Well you're missing out because except for talent, there is nothing the NBA does better than college basketball from an entertainment standpoint

That’s seriously the dumbest thing I’ve ever heard. NBA has far more storylines and better upsets because unlike in the NCAA, an NBA championship will get you into the HoF. There’s only been like one guy to make the HoF out of his college career

BIGGER UPSETS!? THAT IS THE DUMBEST THING I'VE EVER HEARD!

Literally 2016 finals, bigger than any event in the history of college ever. College is a ton less popular and mainstream, I don’t even know why you think they’re comparable.

The Cavs vs. Warriors doesn't even come close to the UMBC vs. UVA.

Yes it is actually 150x better. It had the two best players on earth, the best defender on earth, two of the most clutch moments ever, thr LBJs mission storyline, the OKC storyline, you fucking wish yours was like that lmao

As an upset though. UMBC vs. UVA was between a team known for their chess team and computer science program beating a team that humiliated the entire college basketball world that season. The cavs had the best player in the world...

1. That game wasn’t even close y’all got blown out so it wasn’t that good, and UMBC lost in the next round, Cavs vs Warriors was for the most prestigious award in basketball. I said two best players LBJ is one of them

This game is better than Cavs vs. Warriors game 7

No it isn’t. No one with NBA talent, no big names, no storylines, no popularity, none of it, not the most prestigious award you can possibly get..l

Shut the fuck up about "MOST PRESTIGIOUS AWARD!" If Cavs vs. Warriors is the only game you can name as to why the NBA is more entertaining than college is pathetic.

College basketball>NBA on an entertainment standpoint

No not at all lmao

Other than personalities and the drama, the NBA can't compete with the NCAA on an entertainment department

No one wants to watch a bunch of bums who won’t ever make it run around and score 50 points total for a team. No one wants that

More upsets, more storylines, contrasting styles, a way for the superstars to showcase their talents, zero to no superteams, and unpredictability. Yeah because the NBA has all that

I stopped listening at ‘superstars’ lmao

if you're so against the nba then get off this site

I like 2k but actual NBA games between two middle teams are borderline unwatchable. I could easily watch a college basketball game between two mid-majors

No Superteams?? Bruh you’re Wild’n. You telling me Duke ain’t a super team? They didn’t just wax the #2 team in the country? Delusional College hoops fan...

I don’t have to...they literally got the TOP 3 prospects in the nation...that’s the definition of a superteam.

Yeah but they have no depth and no experience

Well Zion seems experienced enough roll over everybody in the paint like damn bowling ball, and he not even the best player on the team. A super team is a team with a lot a star talent, and this team has exactly that with the TOP 3 prospects in the nation

They beat up on a team that had a god awful gameplan. Stop boosting them

Ok you just completely ignored what i just said...

Bruh u a girl or some shii