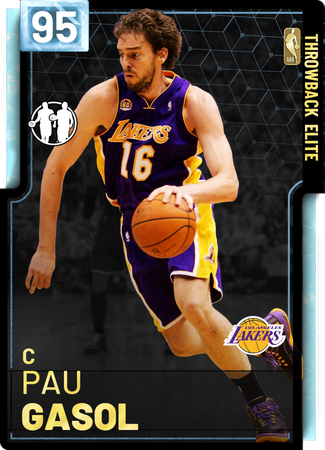 Best stretch 5 in the game

He also carried Kobe in the fourth quarters both years

Kobe never won shit without a top 5 big man to carry him.

Pair him with marc gasol

Simple Pau better in the post but Marc was better defending

Lol weakest argument ever.... Like I previously said, first team doesn't really indicate that you are a top 5 player. No one would say that Lillard should be ranked higher than Curry, Westbrook or Giannis

Marc was never a top 3-10 player in the league. Dont matter how much you try to spin things around. It's just not true

Yes he was he was eighth in MVP shares in ‘15

Waoow one measly stat that proves absolutely nothing. Ask anyone you want, Pau was the better player in the NBA and with the National team. I can't believe you are still stuck on this honestly. Look at their accolades and stats.

Kid actually shut the fuck up, that shows that he was top ten and you were wrong don’t try and be a smart ass.

The stats don’t show Paus sub par defense, but do however show his inflated numbers on awful Hawks teams

Ok now you're just trolling and it's sad because you can't come up with a single valid argument. I am 30 btw and have watched more basketball than you will in your entire life. Pau is a national icon here on the same level as Nadal, Alonso or Iniesta. So don't try to come at me with your pathetic shit

thats cool, im 42 and live in my mom's basement.

Well you should probably find another place to live.

eh no i think here's better than any place i've been in, like the street.

Why would I even lie idiot? Like i said a month ago, "go and get some friends. You have a toxic mentality that won't be good for your future"

You’d lie to make yourself look smarter, no adult is playing fking 2k unless they do it casually or for a living

Mehh first team can really fluctuate depending on your team's success. Pau has been an essential part of two championship runs and imo deserved to be the Finals MVP vs the Celtics. Plus he put Spain on his back many times winning the WC, Eurocup and Silver Medals

I said who’s a better player, having a chip can indicate to how good you are but it doesn’t make you better.

Did winning with LA in ‘02 make Mitch Richmond better than a 4 point per game scorer?

No, he was still a four point per game scorer, nothing more, nothing less

Pau was great but Kobe was the leader of those teams, Marc lead a team to the WCF in a much harder conference

The teams Pau played in ‘09 were the Jazz, the Rockets (wherein Pau had no answer for Yao Ming and almost lost to the Rockets in seven games, despite the Rockets second best player in T Mac being injured), and a poor Nuggets team carried by Melo

Pau didn’t play particularly well against the Cs either

1) Never said anything about a role player winning a chip, don't understand why you would bring that up since Pau was always the best or second best player for his team when winning a title
2) Pau was the best Lakers player in that Finals vs the Celtics
3) You still didn't comment about his impact on the National team which actually shows the big difference in skills and impact between the Gasol brothers.
4) Marc was part of a great defensive team that featured three 17ppg players (including Marc) and solid role players.
5) Pau showed that he could be a focal point for 4 franchises and redefined his game several times
6) I am Spanish and have followed their entire careers. Everyone here will tell you that Prime Pau was easily better than Prime Marc

for my pau, im spanish

it is bette paur to say that someone who sees it every summer as it destroys 90% of national teams, someone who has seen how he has won 2 rings, 1 roy, 4 best teams of the nba, 6 all-star, acb mvp, world cup mvp, 2 times mvp of the eurobasket, top scorer in the history of the eurobasket, reach 20,000 points, be one of the best in the history of the nba and one of the only 4 players with 20,000 points, 11,000 rebounds, 3,500 assists and 1,900 plugs marc is a beast but pau is a god I repeat it says someone who is Spanish and sees it year after year destroy with the spanish team after a great season in the nba

Graciiiiiias. This guy doesn't know anything besides the NBA. Wouldn't shock me if he ignored that both Pau and Marc were ACB league MVPs before coming to the NBA

I already knew that. You probably never watched Pau play for the Grizzlies.. Besides your only argument to justify that Marc was a better player is that he made 1st team All NBA which is just stupid. But thanks for making me laugh at your ignorance ;)

I could and have compared team success and numbers but whatever. I’m not gonna fking talk to someone who is ignorant enough to say Ray Allen carried teams he wasn’t even the best player on

Jajajajaja are you this nashfan kid that just writes dumb things?
How can Ray Allen (24/4/4 and 4 time Allstar with the Sonics) NOT BE the best player compared to (16/6/2 and a 1 time Allstar) Rashard Lewis... Are you really this into denial?

Side note : I haven't seen another person agree with your statement on both topics. When everyone disapproves with your opinions, it might be time to let it go and accept your mistakes. Kisses

Lmao you clearly didn’t look at what I said he wasn’t the best player in ‘05, the only year they made the PO

One season where they makes he playoffs outweighs the seasons they didn’t, and Rashards numbers are obviously going to be down when he spent his rookie and younger years there while Ray only spent his prime

Those are their respective prime years idiot

No they aren’t those are their ‘05 averages

1) Rashard was not double teamed as much as Ray due to his lesser abilities to create off the dribble. Ray was also coming off a ton of screen plays which attracted the help of other defenders.

2) Ray was way better EVERY season that they played together. Doesn't matter if you try to to believe otherwise. Stats, eye test, peers recognition and accolades proves it.

Every person with a normally functioning brain will take Player B and it's not even close. Rashard shot a bit better in the regular season but was atrocious in the Playoffs.

Rashard has been a very solid player but Ray produced a HOF type carreer and (before Curry/Klay came around) was considered the greatest shooter of all time.

Case closed. I won't reply on this topic anymore

How did this conversation turn into who is better Ray Allen or Rashard Lewis?

Or how did it start?

this card is pretty good he can even shoot 3s

So when’s the next premium set coming

This card is godly

The hidden fake players will be realeased in mt or absolutely fake?

https://2kmtcentral.com/19/lineups/104250/current-lineup Any suggestions would be appreciated, thanks in advance.

This card is way worse than the Marc card.

kobe is the reason he was in LA

So basically a worse version of Marc gasol