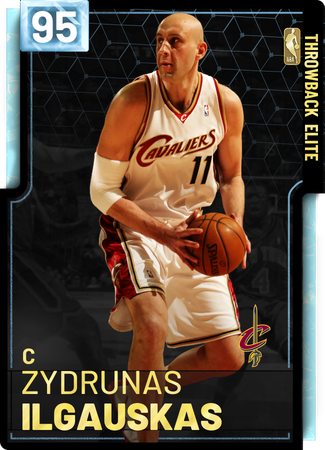 Beast of a Diamond

BEST CENTER FOR 5OUT

fuck off no one cares about your lineup

Sell your garbage squad and buy every throwback elite players under 20k, then open packs with all that mt and get nothing ;)

fuck off ya donkey

best stretch in the game

BIG Z was the diamond over Brad daugherty WTF

50 speed and 25 lateral quickness LOOOOL, still though cant wait to run into people using Hedo at the 1 and spamming pick and pops with this. guy.

Kinda but Porzingis is just wayyyy more athletic and mobile

People who think this card is good are very wrong 25 lateral quickness, unusable

Maybe not now, but in April

High key, for what?

Should I get him or Ralph Sampson?

I pulled this from Kobe's 81 point moments challenge LMAO

If you want to cheese, this is your guy!

https://www.basketball-reference.com/players/i/ilgauzy01.html
yall tell me if these numbers deserve a 92 open 3 smh

The weird thing is that this guy couldn’t really shoot threes, at the end of his career he shot them at a decent percentage even though it was only about half a three a game. But this card can’t be because of those season because he averaged 10 points per game. This card says he is 29 years old when he shot 2/9 for the season from three

pick and pop cheese with lebron was the best

Would anyone like to see a review on this card? He could potentially be a budget, elite player.

this dude has one card?!

He looks to be a better Marc Gasol!

Gasol better at D but yessir

Marc does have better stats, but at the end of the day Big Z got 2" on him.

And a fast release

Especially when Gasol has 80

I can tell he's basically going to be the new Jokic with slightly better defense.

Damn, can't believe this guy managed to get 45 million + likes

Get kristaps put a 5+ shoe on him , get mike d'antoni and hes way better than big z

Two COMPLETELY different types of players, man. I've watched them both in person.

I guess I kind of see what you're trying to say, but give Big Z his props.

suggestions? chris has been average at best for me. bad release

help please
i need to know if i should sell blake
https://2kmtcentral.com/19/lineups/129623/suggestions-pls

Any suggestions for my squad?

Go away no one give a shit about your team