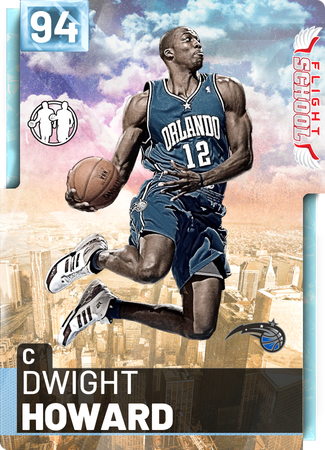 A beast in the right system

CHEESY WHEN U GOT MAGIC JOHNSO

Fitting that it has 69 likes

SOMEONE GOT IT TO 70

Had to unlike to preserve 69

The peace has been upheld

Better than the collection reward tbh

It is honestly, fast, great dunker, amazing defending and rebounding. 70 free throw makes this a must cop.

Would you choose him over Ben Wallace ?

Which one would u choose between him, amy Shaq and diamond Ewing??

If you put a +5 Speed Diamond Shoe on him, it'll give him 98 speed, which is just unfair for anyone you're playing.

Yeah wtf and 77 passing IQ is a little weird

How's a man gonna get his ass pounded so hard that he needs surgery?

All jokes aside I miss this Magic Dwight. He was ridiculous on the defense, and would throw down the meanest fuckin lobs/posters. Wish his career didn't go to shit when he left Orlando. That superman dunk is still legendary.

He is being framed.

Yes the girl who is saying all that stuff about him tried to do the same to Famous Dex a few years ago. She just wants some clout and publicity for her book

Did the same to Playboi Carti too

It's not even a girl

YoUr GiRlFrIeNd iS a BoY,
iT’s A tRaP

Dwight Howard won DPOY 3 times and in a row, right after Ben Wallace and Dikembe, both of whom have won 4 times.

Safe to say he is one of the best rebounders and defenders, and he singlehandedly carried Magic into final.

Very cool stats, I don’t think I ever would’ve known these if not for your original contribution to the comment section

its march and in my humble opinion, based solely on his speed and strength, he is one of the best centers available. truly a man amongst boys, for sure 10/10 Kelly oubre approved.

speed with ball also goes towards the speed of dribbling

Hey can u send some opinions and suggestions please! https://2kmtcentral.com/19/lineups/21418/the-chosen-one
Thanks!

dwight is not funny and is a bad player fuck him

This card might be the only one capable of "containing" Giannis... Adding a speed/lat quick shoe of course :))

This eliminates the possibility of a diamond Dwight for the next throwback elites, so Diamond Tmac or riot

Probably diamond Penny or Shaq. Won't have another T-Mac card a week after they threw one in Flight School

U right, u right. A penny would be dope

And we did lmao

How much is this one going to go for on the AH?

Love those shooting stats and... WAIT WHY IS HE FASTER THAN CLYDE DREXLER

Thoughts on the current lineup? Debating on getting PD Kareem or even Diamond MJ.

You guys in the comments fr not funny

This is a great card

Dwight back then was actually one of my favorite players. Even tho I wasn't watching him as a rookie or his finals run still. Then he went to the Lakers and fucked up kobe's legacy

He didn’t fuck up Kobes legacy? What are you talking about?

Yes he did. Motha fucka cost them a champ. Plus injuries. But Dwight changed the Lakers that season in a bad way

They weren’t winning a championship, not with the Spurs and the Heat and the Thunder in the league that season. Kobe had already cemented himself as one of the greatest and toughest players ever at that point, and even though another ring wouldn’t hurt, it’s not like Dwight did anything more than ruin team chemistry. Dwight was a near 20-12 player averaging 2 blocks a game. Kobe had injury problems. The team was overrated from the very start. Dwight most certainly did not ruin Kobe’s legacy with one bad season.

It’s day to day and that shit obviously fake af

Woj tweeted it so its real

It’s not day to day anymore because of the surgery

*Insert clever joke about Dwight's situation with a trans man.*

should be 99 ball control tbh

Thank you for your original contribution to the comment section

Okay, now THIS is Epic

I know the face teee heee

Jack Salt is better than this bum

Whats with you and Jack Salt?

He's the starting C for UVA

I mean he started against Maryland. He didn't start for the Battle 4 Atlantis, that was Mamadi Diakite. But I believe he'll be the permanent starting C for UVA