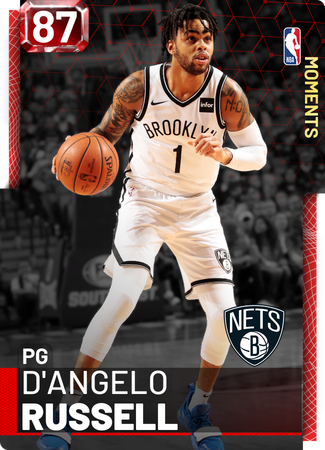 I'll stick with the saphire.

he can also rebound

the sapphire has better layup, defending, and shoots 3s instead of 2s. No reason to get this version unless you really need the free throws...

Best player in the league. Young GOAT. Got one ovr better, but worse in-game stats

His sapphire is great. I was waiting for an upgrade with same 3point stats and.... Nothing worst then blue card

His 3 should be at least a fucking 85, also where is Dinwiddie?

2 for 6 on threes that game. A 78 is pretty reasonable

What the fuck do want from me? Also, one man can only watch so many games, and also why would watching games matter?

I can just look at the box score

there's a handful of games everyday, too much to see them all. do you think people are really prioritizing nets games?

yeah i look at stats, but watching every game is unrealistic

Ik you guys are flipping about the attribute difference, but there's only a 1 overall difference between the two. Its like the two Trae Youngs. This DLo has better playmaking, way better free throw, and has a good mid range and decent three, which can be fixed with a good coach and a shoe. Not to mention if you add badges, this DLo is better.

Sorry but I think you are completely wrong here. The Sapphire has Gold Limitless, DRD and Catch&Shoot which are much more expensive and effective in game than the 5 decent badges this card has. Also if you compare two cards it should be done without any boosting. I can add the same coach and shoe to the Sapphire (which btw has much better system proficiencies).
The 86 ovr has much better defense and 3pt ratings which are very important attributes to have for a PG compare to a slight upgrade at playmaking and mid range shooting that is less OP for the Ruby.

Conclusion : The Sapphire is leagues better than this ruby and has (without taking into account rebounding stats) 37 total more attributes.

That's only if you value three point shooting that much. Sure its great, but I can put the same badges on this card and do great. Just like sapphire paul george is lights out with badges. From a cost effective standpoint the 86 is better. But as a overall card this DLo is better. Mid range is a high percentage shot, something to rely on when the three doesn't fall. I had that 86, and it's frustrating to miss mid range shots when the three stops falling. And btw that rebound is a pretty good addition imo. The defensive difference might be worse, sure. but it isn't horrible. He can play just as much defense as the 86. Just like how there isn't much difference between 79 and 83 ball control.

So you are willing to pay 30K+ in badges to catch up to a lesser overall card? I can put a Mid range shoe (cheaper than 3pts) and get closer to his Ruby ratings than the other way around for the 3pt rating.

How can you value a very insignificant rebounding upgrade (+11 for 3 attributes) for a POINT GUARD.... on the same level as a +78 stats for his defense??

Compare which stats improve for each card and its not even a discussion.

Ruby has:
+35 FT and +13 to all his Mid ratings (Decent upgrades but no where near as impactfull as the downgrades it suffers)
I tried both cards and it is clear as day, the Sapphire is much more OP and can fit pretty much any playstyle.

Ah, I like how the ruby plays more. To each his own ig. I value my FT and playmaking over threes

You are being dishonest man... Worst badges, worst system proficiences, worst important attributes and more expensive... How can the Ruby be a better cop?

I just like how this one plays better. Is that so bad?

But it doesn't.. I tried both online and off line. The difference in performance is crystal clear. Maybe you should try again the Sapphire and it will for sure change your mind.

I kept both for card collection. The sapphire can shoot, yes. But I like the ruby better becuase 1. I play on ball d, so idc about 70s-60s stats. I just add d stopper. 2. I play in the mid range area a lot because ppl off ball 3. I need my free throws to hit. 4. There's a good difference in ball control, and easier to speed boost with ruby DLo. Just a personal preference over the 86.

Sorry to again disagree but I feel like your judgement is not genuine. Your premise was that the Ruby is better but you haven't given any true argument to solidify that stance. Biased feelings are not a correct way to give a judgement. I gave you three solid points (stats, badges, proficiencies) to back up my claim. FT shooting is a good upgrade to have but besides that nothing else proves that the Ruby is better (which it isn't ;)

Why are you trying to tell me what I think? I already told you my opinion. You're just being an asshole at this point. Just leave it alone. I play better with the ruby than the sapphire. Is that so hard to understand? Just because you play better with the sapphire doesn't mean I do. I could care less about proficiencies and badges, I keep badges stored in my collection. The ruby badged out plays better for me than the sapphire that's that. Doesn't mean it has to for you.

No I am questioning your judgement and trying to make you rethink your position since you were the one stating that "This DLo is better". And again if you need to badge up a card to make it "play better for you", doesn't that mean that it was worse in the first place?

Let me break it down for you. I have both cards. I've used the sapphire in TTO and domination. It doesn't hit mids well, and bricks free throws. It also gets a few turnovers. The ruby released. I bought the ruby. I put some badges on him. The ruby has nice hotspots that makes him deadly on the right side. Coach D'antoni give DLo +4 open 3. That and shooting badges is all I need to be consistent. I don't him to be a sharp. He hits his free throws, he doesn't get ripped up as often. His speed boosting ability is better. He can get a few boards. I just like the ruby better. I only need shooting badges. The 86 came with C&S, DRD, and Limitless. Ruby came with Dif. Shots and MRD. That and dimer, acrobat, and P&R maestro, which makes him really good off screens for three or mid. I add limitless and C&S, and Ankle Breaker. I'm good. He's better than the 86 for me. Simple. Why question my judgement when the 87 is literally outperforming the 86 when i used him? And also, people badge up almost all of their cards. That's the point of badges...to make them play better.

No they don't smh... Why badge up a card that will be outdated in a month...? I havent put a badge on a single one of my cards and I have a very decent lineup without spending any money

Because I pride myself in using different cards. I like that I use cards other people don't use. Like emerald Brook Lopez. With shooting badges he's a god. I bought him for 1,800, badged him up for under 15k, and sold for 25k.

This is so true. He is sooo cash from deep its ridiculous. I had LaFrentz for a while but Brook hits more consistently. Have you tried Vlade? Very underrated card imo

Haven't got a chance to use him. I used to run Lopez at PF

Waow you are a savage smh. I feel like he gets burned a lot even at Center so I can't imagine myself using him at PF jaja

his mid range hurts me and his three ball

Sapphire has more attributes and much better defense