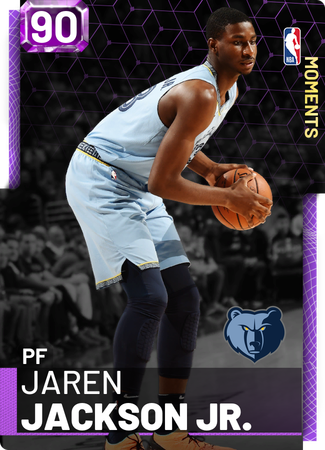 What a disappointing card. I get that 2k wants to keep the stats true to their performances, but 60 block is beyond disrespectful to JJJ

It’s disrespectful to his averages but is accurate to his game, which is what counts

You’re 100% right, I just don’t really like the way 2k decided to do that this year

They shoulda done it where it doesn't dip below their base card (so no lower than 82 block and 52 steal I think) and where it also accounts for their averages. Like, if the current card has a whack stat and he didn't get any blocks or something it should be decent cause of the averages. Imo it would be a lot better than that

Sure it's annoying, but I like it. This way, every diamond and PD doesn't have ridiculous stats

I love triple J dude is a stud. But I like that 2k doesn’t op most of their cards I like that the moments is just based on their game.

Just because he didn't get any blocks doesn't mean he isn't still an amazing shot blocker. If Steph curry scored 60 points in game all from mid, should 2k give him a 60 3-pointer? If Drummond only grabbed 7 boards in a game, should his rebounding be a 60? I mean to say that the logic is flawed. A player should have stats lowered for their faults and increased when merited.

Yes, to all your questions, considering moments are based on specific games.

Hell, if you think Curry deservers a 60 three ball if he happens to not shoot any in a game, I suppose having any sort of discussion is out of the question.

They should make it so that each moments card has no stats lower than the base card. This way this 60 block shit doesn’t happen again

Hed be diamond if hes block and rebound were up

It's good but with some serious problems. If they don't record any of one particular stat, like he didn't have any blocks, they just shouldn't increase it from the base card. For example, his block should be at minimum an 82, not no damn 60. It should fluctuate between moments cards, but not go less than the base card. I think it would be a lot better that way. They should probably also take into account averages, like since JJJ averages 2 blocks a game, they should give him a small increase from the base card, to like an 85 block.

Better than last year. They didn't base it off performances and still lowered stats

I'm telling you he's gonna be a future DPOY.

We will return to this comment when he will.

The Sapphire is way better

Only man who can stop him is Tom Izzo

Again just like the KAT diamond issue. MOMENTS are based on game performances if you see a big man with disappointing block or other big man stats. It’s because they didn’t do that much in that stat in the game. I’m all for shitting on 2k but with moments this doesn’t warrant it. I’m with 2k on this. I’m saying this from a guy who loves JJJ dude is a monster.

whiteside 21/20 9 blocks gets an amethyst card

bigs arent going to have 40+ point games , but performances like those are diamond worthy imo

Selling 1.2 million MT points on PS4 hmu or add me PSN is ReidCaron

I hope he can have a good career because I wanna see him and Kristaps go at it in the finals one year.

advice on line up https://2kmtcentral.com/19/lineups/81330/larry-johnson-pd-lineup

thx you. we need more people like you in this world

I love my sapphire JJJ. Now, what the fuck is this? 60 block? 60 steal? This card is far worse than the sapphire, I know he didn't have a single steal or block, but this is still DISRESPECTFUL AS HELL! He should have 80, minimum, for both stats, even if he doesn't record a single one of ether.

How the fuck can you be this dumb.

Those are nice stats jumped straight to that amy

that was the worst game I've ever watched, worse than Middle Tennessee.

Which game, Virginia basketball is a thing of beauty