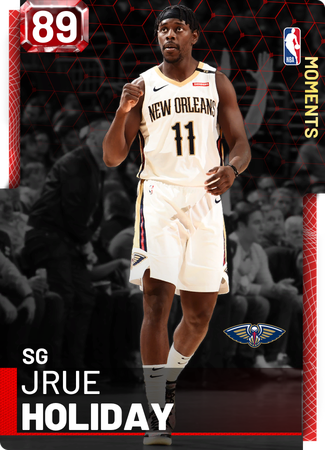 Locked up Dame in the playoffs and is one of the most underrated two way guards in the league.

This is it, chief.

he did not lock up dame. triple teaming is not locking down. thats abusing a horrible coach

I agree w/ ur comment. Accept 4 the horrible coach part. Stotts aint a bad coach. It was just that Dame and CJ was their whole offense. Nurkic was struggling and Shabazz was too small to guard Jrue or Rondo.

stotts is a horrible coach. all he can do is run iso instead of using our good shooters in plays just sticking them in the corner. he chokes all the time in the playoffs leaving dame and cj to fend for themselves

Stotts made players like Shabazz, Vonlegh, Davis, and Crabbe get payed.

He didn’t make them get paid*. As a Blazers fan, I have seconds on what @Novafan789 says. Stotts abuses the isolation game, and his poor coaching goes beneath the face value. Vonleh was never truly used in the Blazers system. Ed Davis was just like Vonleh, he was rarely used and left to watch Dame and CJ run useless isolations. Crabbe was a great shooter, something Stotts failed to take advantage of in Portland, never shooting 4 threes a game when he’s taken 6 or more his last 2 seasons in Brooklyn. Shabazz could’ve become a valuable bench asset and the trio of Napier, CJ, and Dame was among the 25 best trios statistically in +/- amongst all nba trios when they shared the court together last season, and Stotts again failed to take advantage of that. When it comes down to it, if Dame or CJ or both of them aren’t from the field, players like Aminu, Harkless and Nurkic are left to fend for themselves and have nowhere to go and nothing to do because Stotts continues to have our backcourt run isolation when they’re shooting so poorly from the field.

Whats wrong with running a lot of Iso with one of the best backcourts in the nba. They have one of the best offense in the league every year, and who else would they run there offense through.

We saw the issue in the Western Conference Quarterfinals last season, you put a good 1 on 1 defender on a isolation first guard and the defense is going to get good results against a coach like Stotts who abuses the isolation game. Sure, it works against bad defenders in the regular season, but come playoff time, against the best players in the world, not gonna happen.

Who do you want them to run the offense through then? Aminu?

I can’t argue with people this retarded. I’m saying he abuses isolation. You can run an offense through someone without abusing iso.

And don’t disrespect Aminu or I’ll burn your house down.

Do you even watch basketball. The problem with the Blazers is that they don't have any wing shooters or ANY scorers other than Dame and CJ thus why Stotts runs the offense through them and puts them in iso situations. Also if you watched basketball you would know both Dame and CJ exile in the iso system. CJ is a SHOT CREATOR he's not like Klay where you can just put him in the corner and make him shoot only 3s. And ik they have nick, seth, and they used to have patt and Crabbe, but none of these players are very consistent shooters they are all very streaky. Also it's hard to have those players on the floor because they cant play much defense.

I watch every Blazers game very intently, don’t tell me I don’t watch basketball. I probably watch way more Blazers basketball than you do. I never said iso doesn’t work in the regular season, but when teams pick up their defense and there’s better defenders in the playoffs, how do you expect players like Dame and CJ to fare against double teams and a defense like the Pelicans. We’ve seen it doesn’t work before, continuing to do it is insanity. Again, just because Dame and CJ are our only 2 good players doesn’t mean they need to score through just iso, there are other ways to score.

When you pass no nut november

And your reward is prostate cancer

But the accomplishment is awesome

Your going to tell me that 2k is giveing all players no speed with ball come on 2k fix it.

82 speed w/ball 2k you're on something i swear

Very underrated player. Can be lethal when healthy

3 and D monster, he’s gonna be a beastly PG

Edit: nvm not just 3 and D, he can do everything except post up and dunk. BEAST PG

He is a shooting guard what

SG. When healthy, Elfrid Payton starts at PG with Jrue, last year Rondo was the PG.

oh my b i dont watch the pelicans so

He usually is, but...regardless, they start him at the 2, anyway, alongside Tim Frazier, of all people.

Best player on the pelicans

Are fucking kidding me

anthony davis is a top 5 player and he is one of the 2 future of the nba players with giannis, he is the best fower forward in the nba

If I was gay that means u want to butt sex with me. LOL fail

I’m 10 inches deep in your dad rn. So up yours looser