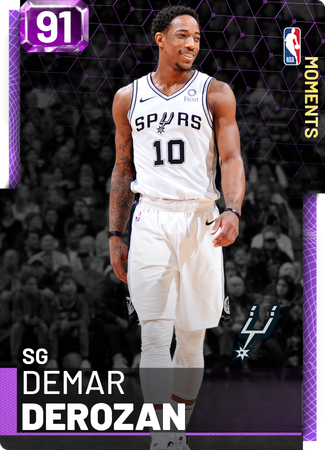 !!Most underrated card in 2K!!

Put him at PG...Worth it

LETS GO DEMAR, SHOW THEM RAPS KAWHI WORTHLESS AND THE SPURS MADE HIM

Well I wouldn't say worthless because Kawhi is performing extremely well for the Raptors and I sorta disagree on the spurs made him part because he was doing well in college and I think he would end up the same on another team. But for that one night DeMar did get his revenge on the spurs so yeah I'm happy for him

Kawhi's great, but as a Spurs fan Im obligated to resent him

That's not true at all. Won you guys a championship with finals MVP. Stop it.

You're from the outside looking in, don't be a bum

By your account, andre iguodala won the Warriors a chip as well

I mean. Finals MVP is finals MVP. Kawhi did nothing wrong to you guys. He didn't want a long term injury and you as a bad fan base couldn't accept that could you.

Ok nothing wrong. How about quitting on his team? How about not talking to anyone in the organization blocking their calls? How about uncle Dennis leaking about kawhi only wanting to go to la and tanking his trade value? How about hiding from trainers like a petulant child? How about not riding the bench in the playoffs days after your coach and boss for the last 7 years wife passes away? San Antonio bleeds Black and Silver and you call us a bad fan base GTFO!! He wasn’t alone in winning us a chip the 2013-14 spurs were a juggernaut of perfect team play. Hell an argument could be made for any of the big 3 or Boris Diaw getting that award that year, kawhis game 3 just happened to be sexier than Boris dropping 6 assists off the bench.

u sir are a legend

You have no idea what you're even talking about, and I can tell your a new fan to the NBA.
He only won that MVP for guarding Lebron well, that achievement was a team effort, which is what San Antonio has been all about for the past 20 years. Kawhi couldn't handle the team, and sticking up for eachother and instead decided to give up on the squad because of tendinopathy which isn't a real injury, just a tweak in the nervous system. He was also cleared by the Spurs medical staff twice, and decided to bail, even during the playoffs when Pop's wife passed away and he was deemed fully healthy he still quit on the team.
Learn some manners, get a brain, maybe a heart while you're at it, you have no clue what basketball is about you wimp

It wasn't completely his decision to leave, his camp was keeping him away from anything to do with the Spurs and a lot of it was because they felt the Spurs were trying to rush a bona fide superstar back into the game, which is valid. I am not going to take a side, but I can definitely see both sides of the argument.

I feel you KD is great, but being a Thunder fan means I also resent him

no one will ever understand, but also most of the people here are 2K fans and dont watch ball

KD is a cupcake #THUNDERUP

The argument that spurs made kawhi is valid. If he wasn’t drafted by them he would never have been instructed by Chip Engelland the spurs shooting coach to change his jump shot to one based more on Kobe’s. Kawhis jumpshot would be broke anywhere else he’d have gone. I’d pacers kept the pick his development would have gone in a completely different direction as backup to Paul George. He might have made all defense but with a broke jumper he’d never sail to the heights of finals or regular season MVP.

stop being a Pop hater, he made Kawhi just like Kanye made Taylor

Not all Teams have a shooting coach, the only thing I found on Paul changing his Jumper is from a 2014 article about how peculiar it is. It doesn’t mention anyone coaching it.

he wasnt even drafted by the indiana pacers

They traded the Kawhi pick and the rights to to The current 3 point% leader Davis Bertrans for George Hill.

When the teacher's pet gets into a fight with another kid and he spots a teacher.

He didn’t shoot a single three that game

Thats not how moments cards work though, but yes, he does not like the three.

That 3ball is hurtful

But Giannis doesn’t get a moments card for his 31 point triple double. Smh

He has a PD and a opal, stop complaining

No, he hasn’t gotten any moments cards so far

Bucks have 1 moments card this yr. Its rubbish

That 3-ball hurts but the rest is nice.

About time 2k put some spec on his name and dropped a card! Its been wierd running a ruby with pd's and diamonds

no charlotte for demar? strange...

https://2kmtcentral.com/19/lineups/112676/oooof
Any suggestions are greatly appreciated