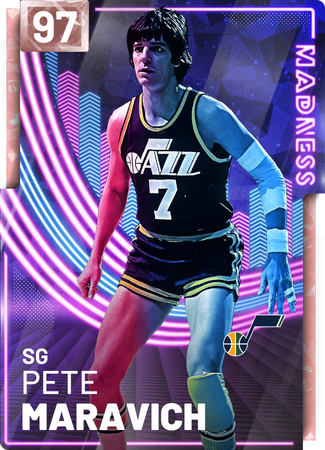 God of the Shooters

theres actual footage of this man slamming basketballs as hard as humanly possible in between his legs from the front to his back during practice nearly risking his balls and entire bloodline just to practice his handles just to break ankles and i respect him so much for that even if his practice drills were extremely unnecessary. regardless this man was ahead of his time so maybe risking the balls was all worth it. nice card

I’ve done that drill.... got to a certain speed and then the ball got mine lol

And on that note. Where is his HOF ankle breaker??? 2k still tripping out here

not funny at all

I’ve seen that video too. I’ve tried it but hit my balls

In order for it to be a "risk" you have to know about it.

how does he not have 99 ball control honestly

Or at leastt gold dimer

Pete really does have spaghetti arms

now he strong, (he has 43 trenght whihc is high compared to people like you XD

HOW TF DOES THIS CARD NOT HAVE DIMER

HE EVEN HAD PISTOL ON HIS JERSEY :)

Pete is so underrated. He could have been one of the all time greatest. Ridiculously talented player

Could have? he IS one of the greatest top 50 imo

i meant more along the lines of top 10/top 5. people might say that's crazy but don't understand how ridiculously good he was. on a side note i would really recommend his biography by mark kriegel, it was a great book

Rip yeah. But you're trying too hard, your comment gave me aids.

They cured AIDS last week so time for a new, tired trope.

Why does this man look so confused?

This card is underrated,
This man could pull up from everywhere even when there wasn't a 3 point line, Common 2k 97 dribbling, this man crossed everyone, was way faster than a 94, and passing accuracy should be way higher. This man deserves an opal way more than most of these opals, such as rudy gay, Lonzo Bricks, and how does Westbrook have it but Pete doesn't

https://2kmtcentral.com/19/lineups/243609/no-money-spent-v-20
Any suggestions would be helpful and thank you for your time.

Best college player of all time other than maybe Kareem, should be the reward

He is the most overrated college basketball player ever

Doesn't take away the fact that he averaged 44 without a 3-point line. Losing also tends to happen when you don't have any teammates. But tbh you're right he's probably top 5 not top 2

RIP to the most underrated shooting guard ever, he is top 4 in my book

This will be the cheapest PD in the set, but he still a god gg

He's just a better Jimmer honestly, so he shouldn't be cheaper

any suggestion for my lineup https://2kmtcentral.com/19/lineups/243149/any-suggestion-for-my-lineup

He is imo the most underappreciated NBA player ever. tons of respect to my man pistol Pete

All time leading scorer in NCAA history (and it isn’t close), and he didn’t even have a 3 point line

DUMB AMERICANS KEEP ON VOTING FOR YOUR DUMB ASS PRESIDENT. YOU'RE ALL IDIOTS

i want a galaxy opal pete

I hate his release

"That's a little scary," said sports writer Andy Nuzzo, who had interviewed Maravich when he played for the Atlanta Hawks.

Nuzzo was assigned the 1974 story because Maravich, an area native, "was unhappy about the fan reaction he was getting, unhappy that he was being labeled a hotdog," Nuzzo said.

"It was right after that fan had displayed that sign, the one that said, 'Pistol Pete, why do hot dogs cost $2 million in Atlanta and 50 cents in Philadelphia?'

"He had only been playing (in the NBA) for four years and he was saying he didn't need basketball, that he could do something else."

Maravich was born in Aliquippa, Pa., when his father, Press, coached there but moved away at age 9 when Press became the coach at Clemson.”

Well he did Cocaine at half time. I mean, that may have had something to do with it. And the booze.

Literally didn't even play in the NCAA tournament, he doesn't deserve this card

It's more of the fact that he's the all-time leading scorer in NCAA history and even averaged 44 points with LSU without having a 3-point line.

This is to celebrate March Madness, Pete Maravich never played in the NCAA tournament. Are you really challenging my college basketball knowledge

Dude shut up. Nobody is buying what you're shoveling.

Pete Maravich was overrated af as a college superstar. He played for his dad's team so he it became him vs. 5 other players. He went 49-35 during his college career and they were only ranked for one week in his 3 year career. He is overrated!!!

Well, I mean, College is more entertaining than the NBA, SOOOOOO!!!!

"college basketball knowledge" I have a hefty amount of NCAA basketball knowledge myself. It's the simple man, that he's one of the greatest college players ever. You don't need to be in a tournament or win a championship to be one of the best. That also consists of stat-wise. If that's the case Robert Horry is one of the greatest NBA players in NBA history because of his championships and the amount of playoffs and finals he's gotten to.

I know MM is more about those who actually played in the tournament, but when you have one, (or rather still) the all-time leading NCAA scorer in history.


I know we got our opinions, but your opinions are kinda being biased, lol.

"probably never even watched a college basketball game." Assumptions over a card? I see a hardsnotter.

Like I said, you don't have to be in the NCAA tournament to become one of the greatest. That's just a simple achievement as a team. You have your opinion, I have mine:

I do watch NCAA games. Michigan State, V.Cavaliers, and Cincinnati Bearcats. Thanks for the assumption though.


And 'top 25 once' okay, that's still a major achievement. There's a lot of people that'd die just to make that list even once.

He averaged 44 points a game in his fathers system. He's an overrated player who only cared about his stats, he is overrated

A lot of players only care about their stats, you act as if he's the only one.

Sure and Bryce Alford flourished through his fathers system. Your point? There's nothing different. He averaged 44 points. Not many people can do that, let alone put up around 32 in college. I'd say that is a huge achievement. Especially without a 3-point line?

Yea, a lot of players are overrated. Your opinion is your opinion and that's fine.

I feel like people saying it's "without a 3 point line" just prove they know jack shit about college basketball. You used that excuse

I'm sorry, I dropped this subject a long while back.

And that's quite funny because its no excuse, it's a common fact. A simple basketball fan (college or not) know this. If you can put up 44 per game without shooting much 3's, that's great.

He did it in his dad's system designed for him to take as many shots as possible while simultaneously playing terrible competition and losing to those teams. But the lack of the 3 point line isn't the thing that makes this thing impressive, it's another factor but only college fans know it and NBA fans have no idea what it is because they're delusional idiots.

I do agree he played terrible competition. Something we can agree on. But I'm adding in that sure he did it in his father's system, but he flourished in it. In the NCAA there's 2 separate missions.

1. get the scouts to notice you and attempt to get a chance within lottery or top 5-10

While many subject to mission 2 (I mean, hell, people are trying to do both) most seem to care only about mission 1. I get what your saying about Pete, really, that's why I brought up Bryce. His father attempted to bring him into his system so he could pull with Pete did, but forgot he had Lonzo and another big star (could've been) on the team. Bryce flourished, but not the way his father wanted him to.

You have an extremely flawed mindset when it comes to college basketball. Only one and done players have the mission one mindset.

I mean mission one is a lot of players. That isn't specifically for "one-and-done" players. That's a mindset every player (or most) would have. Every player who wants to be in the NBA, wants to attempt to be a lottery pick or even a 1st round selection.

My knowledge about college basketball seems to be fine, I'm sure I know exactly what I'm talking about, lol.