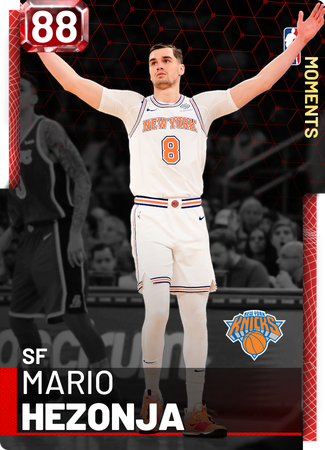 lmaooooo 95 block this is the ultimate troll

is because he blocked lebron james

He has a hidden 99 stat called step over Giannis

Lmao he got a 95 block just for blocking lebron, Then Jarrett Allen should have higher Lol

Weird thought: What if 2k established a feature like Dynamic Duos except did the opposite to where a player on one team makes an opponent's player worse? A kryptonite effect would be hilarious like AI vs T Lue or Mutombo vs Shawn Kemp lololol

Awesome idea. I just think it might create an incentive against the Pay-to-Play model, which I'm sure 2K won't want to risk.

Say you have a gamebreaking card (suppose a 2011 Heat LeBron Galaxy Opal is released) and a neutralizing card in a lower tier (Diamond 2011 Finals Dirk Nowitzki, just to be petty) comes out.

Now you don't want to spend a bunch of money on packs for the slight chance of uncovering a GO if someone with a Diamond is gonna run you off the court.

Otherwise, if the feature is limited to cards in the same tier, any card below becomes even more obsolete than they are already.

thats actually super dope. would feature interesting lineups to counter the metas. maybe jarett allen would lower specifically blakes dunking. others could be like maybe to stop speed boosting

It's a raw idea that will never gain any traction at the end of the day sadly tbh. And you're right, it sounds cool but the reality is the 2k community can always find a way to make the game worse just by being scummy to win, the devs always have their hands full.

They literally made this card a LeBron stopper

GOLD RIM PROTECTOR AND CHASE DOWN ARTIST IS HILARIOUS

Does anyone feel like Jarrett Allen deserves higher due to the fact that he blocked Giannis, Lebron, Joel Embid, and James harden with other superstars.

and AD and blake griffin

so he should have higher then Lmao

But w/ hezonja it was a game winner and unexpected.

Knicks are ass but Mario hezonja is not ass

Is what I would say if he actually wasn't ass

Yeah...well THAT conversation's been put to rest!

THE SAVIOR OF NY RIGHT THERE!!!

718 KNICKSTAPE STAND TF UP WHERE IS THE 99 BLOCK

White people are making a comeback in the nba

Lakers should trade LeBron for Mario

LeBron’s dad taught him a lesson >:)

Lmfao chill with the defense he had one good play lmaoooooo

2k be like...
"This guy gets exposed on defense sometimes, he must be ass at everything on d!"

This man got Gold Rim Protector for one block lmao

Ok if his defense is that high his card should be like this.
https://2kmtcentral.com/cards/142661

Why does 2k. Give a player 95 block to a guy who averages 0.3 blocks a game for blocking the worst player of all time

But...they didn't give him moments for stepping over Giannis...

THE GIANNIS BODIER IS HERE

This dude just does the highlight plays and does nothin else

HE DUNKED ON GIANNIS AND AI’D HIM https://m.youtube.com/watch?v=ZOGzRN7WpYg AND HE BLOCKS LBJ THE SAVIOR OF NEW YORK HAS BEEN FOUND

The face you make when you block LeBron, o wait he did ;)

mans gets a 95 block for blocking Lebron, and that was his only block in that game, great job 2k.

And lonzo is not a ruby this is really bad

Yeah, we know he only got this card for blocking Lebron.
P.S, they honestly picked the perfect picture for this card.
This screams "Mario Hezonja."

He doesnt deserve anything over a gold hes not that good

The King just passed his crown to Mario Hezonja

not impressive. even isaiah thomas could've blocked that

R u sure about that?