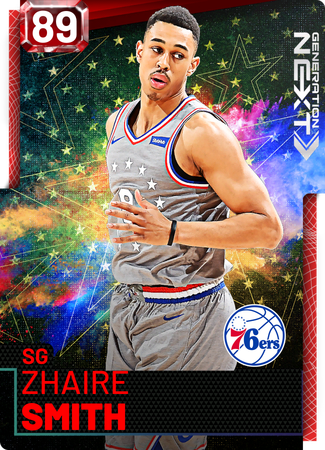 Idk Smith does have a better story as well, Shamet deserved a Playoffs Ruby tho

Didnt he have an allergic reaction or something that caused him too miss most of the season?

And then in August 2018, Zhaire’s fortune changed. First, he broke his foot. A month later, still recuperating, Zhaire ate some chicken at the Sixers’ team practice facility that made his lips tingle. That’s usually a sign of a minor allergic reaction, as opposed to anaphylaxis, a life-threatening reaction that requires immediate medical attention. Since anaphylaxis typically occurs within a matter of minutes and has obvious symptoms—a severe rash, or causing a person’s airways to narrow, leading to difficulty breathing—Zhaire figured he was in the clear. He drove home, thoroughly brushed his teeth, took some Benadryl, and hopped in the shower. That’s when everything went to hell.

Zhaire remembers hives forming all over his body, and texting Andrea and Aundre, who were out watching his sister’s volleyball game. He remembers trying to administer his Epi-Pen, which had expired and didn’t work. He remembers his mom and step-father getting to his place; his mom calling 911. He remembers that he couldn’t stop throwing up. He remembers collapsing.

What Zhaire doesn’t remember is being transported via ambulance to Cherry Hill Hospital in New Jersey. The paramedics administered an Epi-Pen, but when Zhaire arrived at the hospital, he started vomiting blood. Doctors found a hole in his esophagus. He was transferred to a hospital in Philadelphia and underwent a thoracoscopy—a surgery in which doctors examined his esophagus to make sure it would be able to heal on its own. And then came the tubes: to keep fluids from leaking into Zhaire’s lungs, and to feed him.

yikes. That is pretty cool that was able to come back and play

this is going to be dunking cheese

The rebounding is a fucking joke

He's not a rebounder lol

He was a monster on the offensive boards in college

He hasn't been in the NBA though. Maybe next season because he'll be more in shape after having worked out more after the allergy.

I have his jersey

https://www.basketball-reference.com/players/s/smithzh01/gamelog/2019/ man's played as many playoff games as Boogie has

But he has played a game...

This the dude that tried to play D on D-Wade during his last home game?

This guy missed damn near the whole season cause of a peanut allergy...I’m dead bruh

It's not even bad luck, the Sixers medical staff has no idea how to teach young guys how to take care of their bodies. Joel has a poor diet and stays up all night playing video games while Ben is hitting up clubs every night. It's shameful

really? (not being ironic btw i just want to learn more this seems like a real problem.)

Sixers might have a ring right now if their medical staff knew what to do with their players. If Embiid ever goes somewhere like Milwaukee or Golden State he will be absolutely dominant.

This games getting outta hand

You should really get off this site