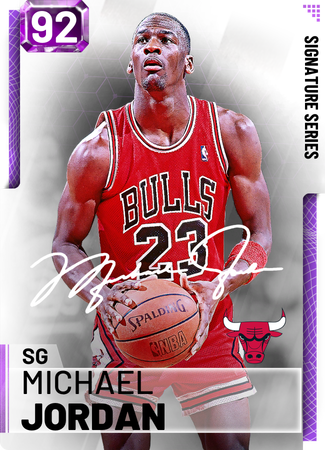 Led the league in steals that year, and only got 85 steal?

Prime MJ was the most efficient shooting guard in the NBA history. He routinely shot over 50% FG during his career. In 87-88 he averaged 53% FG for the season... and you give him an 88 mid range J? MJ's bread and butter was his sweet mid range pullup that nobody could stop. He should have gotten AT LEAST a 93 mid range. This card is TRASH,

can we just agree MJ was a fucking god and the only accurate card is the one with all 99's?

just imagine the market crash
the end is near

2K life is beginning to break down. Everyone now has an MJ or a LeBron or a Giannis or a Magic. Those of us left with our 6'3 point guards can no longer keep up. The clock edges closer to midnight.

why ppl downvoting i speak the truth

they should've made that a rudy kno kapp

I can so many Opal Limit losing to this card

In 88, Michael Jordan was #14 in the league in blocked shots. And he was playing the SG position! AND YOU GIVE HIM 65 BLOCK?????????? STRAIGHT TRASH CARD. 2k made scrubs with better stats than this.

Hahahahaha!!!! “League was full of bums”!??? Ok, KID. They played like their lives Depended on it back then!!!! I’d looooove to throw 20 yr old Lebron into a time machine and shoot em back into the 89 season, against the Pistons. The Bad Boys would fold his ass up SOOOO FAST.

Can someone tell me how these cards affected the market??

This card is a straight insult to His Airness. Garbage stats.

1988 Jordan led the NBA in steals, and you give him 85 Steal? 2k gives current scrubs like Ron Baker 86 steal... 2k gives Victor Oladipo 90 steal... but Jordan in his prime, leading the league in steals is 85 steal?

I have Rubies that are better than this card. What a joke. I'm a huge MJ fan and none of these cards are very good except the GO's.

Also, Prime MJ was the most efficient shooting guard in the NBA history. He routinely shot over 50% FG during his career. In 87-88 he averaged 53% FG for the season... and you give him an 88 mid range J? MJ's bread and butter was his sweet mid range pullup that nobody could stop. He should have gotten AT LEAST a 93 mid range. This card is TRASH, straight up disrespect and no knowledge of bball.

Cool but ruby/amy should be from Wizards :)

So this is the MF that thinks he´s better than lavar huh?

What should I add to my lineup

When I used him he dominated and after playing with him for a few hours, he might be one of the best amethysts in the game.

what is his buy now

i doubt he will

could be a solid card for cheap

I’m looking to get this for the budget squad