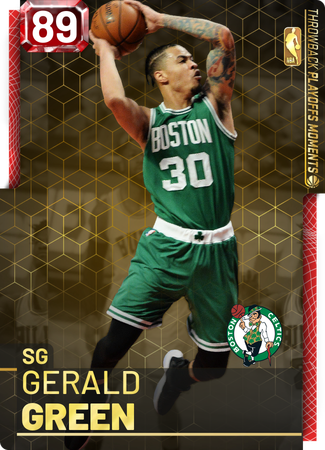 I'ma haf to sell a finger to get this card

the disrespect on his vertical smh

Wow this ruby stats are actually balanced out except strength and rebounding finally thank you 2k finally you get the stats right. He has 9 fingers i know that though which makes him an insane player for drilling 3 pointers like he does.

It's not over yet

This is very different.

I mean, technically they’re both 3-1

And both had Kyrie

Right but Milwaukee is completely outclassing the Celtics in a way that GSW wasn't with Cleveland. Plus, the two biggest reasons why GSW lost that series were because Draymond got ejected in Game 5 and couldn't play Game 6 and because Bogut got injured in the first quarter of Game 6, leaving their options at center and PF depleted (this was obviously before KD, Damian Jones, David West, etc). Remember this was also when Tristan Thompson was actually a good basketball player.

On the other hand, Milwaukee has a healthy Giannis who is at worst the #5 or #6 best player in the world right now, plus a second All Star in Middleton, and they're getting Brogdon back. Kyrie has been awful this series and without him the Celtics just aren't the same team, they can't compete. Idk what the hell happened to Hayward but he isn't the scorer he was in Utah in this series either.

Cheesy af with his animations

HOLY CRACKHEAD he has a 98 driving dunk
AAAHHH

why the suns Gerald Green get a 90 or at least contact and driving dunk. respect on this card tho.

yooooo i've been waiting for this

They need to give him is original #5

Almost as good as his suns card from like 2k14

DBG is going to bust a nut with this card.
Count on it.

https://2kmtcentral.com/19/lineups/389923/current-squad-need-suggestions
900k to spare, any suggestions will help!

https://2kmtcentral.com/19/lineups/389324/sorry-4-spam-but-thoughts4this sorry to post this but i need some help

Did you know that he only has 9 fingers?

Thiught he had 10, can't tell in the picture so ur wrong