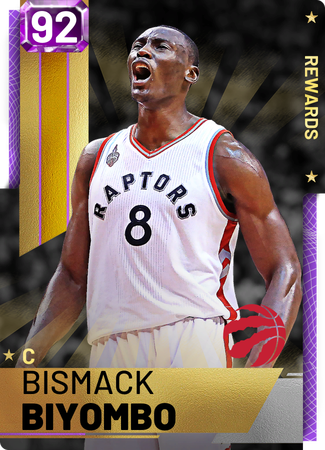 But that one playoff game made him look like Mutombo 2.0

The man the myth the legend Bigmac Biyombo!!!

To be honest, this is what the Diamond Roy Hibbert should've been.
No way that card needed an 80 three...

Great defender, but he cant do anything on offense

Horrible postfade, hooks are hard to trigger and time, FTs is even worse than his Mid range. This card is just good for catching lobs and even that might be hard since he's only 6'9

He can back down defenders really well and when he’s at the rim, he’s finishing with ease. The reason I got 7 downvoted is because he can’t shoot so that automatically means he can’t shoot

He can back down some Centers but because of his height, he won't be able to be that effective against 7 footers. Better be played at the 4 but since he can't shoot.... He is a similar card to PD Ben Wallace (who isn't known for his scoring btw) Also I didn't downvote you, everyone has the right to an opinion even if they are wrong sometimes jaja

And cause he has Hall of fame bruiser

Yes but he still needs to put up a shot and if going against a much taller player than him it just won't be an effective way to score. Small big man are quite useless especially if they can't shoot or are not insanely athletic

smh should be a galaxy opal

i loved using his 2k16 amethyst so i want this one

NO ONE ASKED FOR THIS (only magic fans approve).

no I know raptors fans exist I just say only magic fans approve because literally the magic paid this dude a 4 year $72 million dollar contract because reasons beside his playoff performance back in 2016, as a diehard magic fan I got pissed off for this because the very next year he's literally a bum once again.

Thought you meant only Magic fans approved of the card sorry