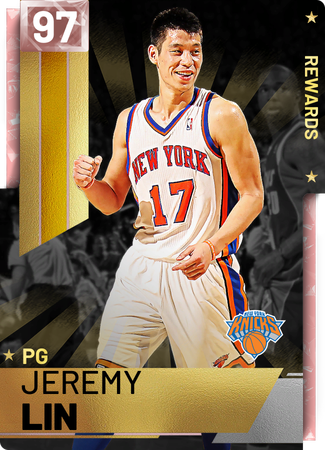 When these Chinese New Year packs came out, I wasn’t going to go for anyone. But then I got suckered in a bought a 10 box. Two Yoa Ming pulls later, I completed the set. I already had Gilbert, and hated his realease. I wanted to get Jermey Lin because I was a fan. Looking at his stats I didn’t have very high expectations. He ended up blowing those expectations away. He plays really well in game with very few weakness. However he isn’t good enough to fully justify the price. However since I’m a fan it was worth it for me.

Use if: You want a fun point guard who can do it all

Don't use if: You don’t want to spend this kind of mt.

Bottom Line: The only justification is if you want to use Yao Ming, Tracy Mcgrady, and at least one other player in the collection. Even if you use all that it still is a risk to lock them in. Overall he is fun to use and is worth it to me.

Hey guys this is my first review, so if anyone has any pointers, it would be appreciated.

My current lineup if anyone wants to see how I use the Chinese New Year players.