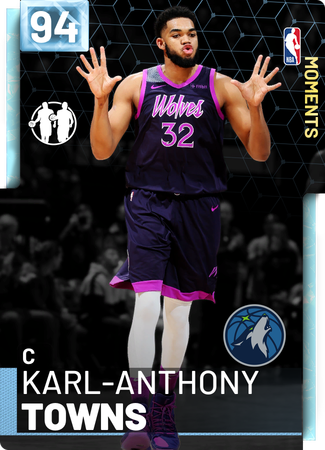 I got this card to replace my ruby version, and he's a MONSTER in game. He turns out to be a much better shooter, rebounder, and defender. He's my starting center, and I wouldn't trade him for anyone else.

-Inside Scoring- He makes about 80% from underneath the hoop, which is pretty good.

-Rebounding- He gets so many rebounds, and he gets about 8 rebounds a game.

-3pt- If you set a pick and fade and get a good release, he won't miss.

-Mid-range- It's about the same as the three.

-Defense- His Ruby version got crazy blocks, and so does this one.

Recommended Strategy: Set pick and fades with him.

Use if: You want a great all around center that is cheap.

Don't use if: You don't want a good team.

Bottom Line: Get him.

I was gonna write a review about the exact same thing until I saw yours. This card shoots better than Marc Gasol, Pau Gasol, Jokic. I've had them all and this KAT is definitely the best. AND he's better at defense and rebounding. He shoots the best 3pt percentage on my team (77%).

I like how some people agree that KAT is better than Marc. What I think sucks, though, is that when I play against people with Diamond Marc, he dominates.

Is he worth getting over ruby Mo Bamba?

I think so. You can even get the 95 KAT for 10K right now, which is better. But I think that KAT is more reliable then Mo Bamba in the clutch.

yes, you should add him limitless