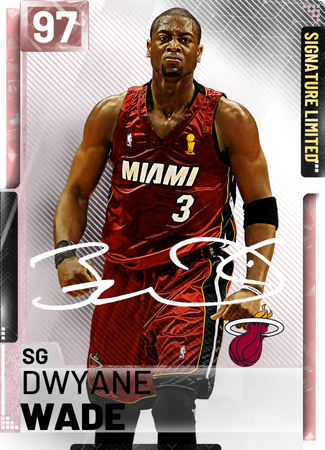 This is my first review of a card ever on this site so I hope it's not too terrible. I never had any ideas of spending over a half a million mt for this card but I remember really enjoying Wade's 98 overall diamond card from 2k18 which ultimately made me purchase this card despite my better judgement not to. Is a 6'4" player still viable in a MyTeam mode or are we doomed to only play small forwards at point guard for the rest of the year? This review hopes to answer that question.

Outside Scoring: I know that a lot of people dislike Wade due to him not having a base 11 like release but I've always really enjoyed his wind-up like jump shot. His release is silky smooth and very easy to green with a little bit of practice. HoF mid range deadeye and 97s across the board for his mid range make it an automatic two points if you decide to shoot from mid. This is the best three point shot I think Wade has ever gotten in Myteam history, with a coaching boost he gets a 97 open shot three which makes this card completely deadly if you give him gold limiteless range. The chance of making open mid range jump shots and three pointers only increases with Wade's HoF catch and shoot badge. The best part about Wade's outside scoring though is his HoF difficult shots badge, his moving jump shot is extremely easy to time and with an added +5 on his off dribble 3 pointer with a diamond shoe he becomes very hard to stop from behind the arc. The only weakness when it comes to his outside scoring would be his free throw, despite having a 98 draw foul he only has a 79 free throw which isn't bad but could be detrimental in a close game.

Athleticism: Wade isn't called Flash for nothing. This card zips down the court with ease, the combination of 98 Speed and 98 acceleration is insane to play with. His level of speed makes catching up with players on the fast break and keeping up with players on the perimeter effortless. Wade's 98 vertical rating is extremely useful when catching out of reach alley-oops and snagging rebounds over other players on long misses. His 65 strength can be viewed as a slight weakness when an opponent is running tall players like Magic Johnson at the point and knows how to play in the post. The mix of 98 stamina and HoF Tireless Scorer is super handy in close games and has saved me in a few games when I just need a little bit extra from this card.

Inside Scoring: Wade's inside scoring is easily my favorite part about this card. I don't do floaters too often with my players but when I have tried with Wade I've made multiple heavily contested and lightly contested floaters with that 97 shot close rating. Wade's layups are great as well, having both relentless finisher and acrobat as HoF badges comes in clutch so often when using this card. His layup animations when attacking the basket can only be described as sexy, he makes tons of heavily contested and even smothered layup attempts. HoF Posterizer is one of my favorite badges this year and Wade makes it even better with his 97 driving dunk and 95 contact dunk. If he is close to full stamina he's dunking at least 75% of the time when driving to the rim. I'm not a great post player but I've thoroughly enjoyed using Wade's 85 post control and 94 post fadeaway, it's pretty rare in Unlimited to find an opponent using a short enough player to post up on but when you do it's almost always an automatic two points.

Playmaking: Wade's 96 ball control and 98 speed with ball are a lot of fun to play around with, his dribble moves are slick and very easy to learn and combo. The slickness of Wade's dribble moves and HoF ankle breaker make this card very hard to guard in a one-on-one situation. Wade's passing is also pretty good, 95 passing accuracy and 95 passing iq are very good for his position but 83 passing vision can be pretty yikes if you are trying to make a risky pass. HoF pick and roll maestro does help take some of those worries away when it comes to his passing vision, this upgraded version of this badge makes him a very viable guard option.

Defending: Wade is hit or miss when it comes to defense. He has all the stats necessary to be one of the best defensive cards (if not the best) in the game but due to lack of position restrictions in MyTeam this year it's very hard to praise this card's defense. He constantly gets shot over by tall forwards in Unlimited even with his 95 shot contest rating. HoF defensive stopper and Hof pick dodger make him not entirely useless when it comes to guarding taller players but I still struggled heavily contesting shots with this card. If you do face a traditional point guard Wade will have an absolute field day against them. The mix of all 9 of his 90+ defensive stats make getting by this card almost impossible if a player is under 6'5".

Rebounding: Wade is a 6'4" shooting guard so I don't expect him to be grabbing 5-10 rebounds a game but during the 20 or so games I have played with him he's averaged a little bit over 3 rebounds per game which is pretty decent for a card with his height. I would say that's thanks to a combination of his 65 offensive rebound, 75 defensive rebound, 75 boxout, and his 98 vertical.

I honestly really enjoy using this Dwyane Wade card and will most likely keep him until the end of the year. His jump shot, dribble moves, badges, and stats are all amazing and make him a lot of fun to play with. He is definitely not worth a half a million mt though, you'd be much better spending that mt on pink diamond Giannis Antetokounmpo or pink diamond Anthony Davis over this card. To put it simply, Wade is a nice card to mess around with but when it comes to actually playing Triple Threat Online or Unlimited it's hard to overlook his inability to contest players three inches taller than him.

Wow, are you sure this is your first review? Lol . I'll never be able to afford this card but this review is great and super descriptive!