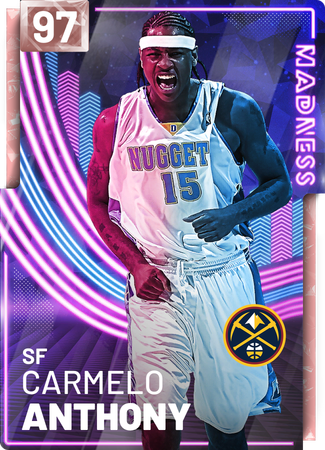 Back in 2017, MyTeam released a series very similar to the Madness packs and Melo was a huge part of that. However, he is back and super juiced up in this form. I watched many people pull packs on YouTube before I spent 300,000 VC on these. Barely anyone was getting Melo. Not going to lie....I opened 21 packs of pure garbage before this beauty showed up. I had already given up hope opening 4 amethyst Jason Terrys and 1 diamond Emeka Okafor. When that card glowed pink you can bet I was praying.

The Madness (prime Denver Nuggets) Melo is the best scoring SF (and maybe overall player) in 2K19 MyTeam. The term "glitchy" gets thrown around a lot with this card and well....I agree. I'm saying this with a lineup that includes PD Pippen, PD LeBron, PD Giannis & PD Kobe (see lineup https://2kmtcentral.com/19/lineups/96613/main-lineup ). If any of you were lucky enough to try out the Diamond Jason Tatum, think his range but with full HOF three point shooting badges (HOF Deep Range Deadeye, HOF Limitless Range, HOF Corner Specialist). This card is absolutely NUTS from 3 point range, a 96 open three, a 96 contested 3 and a 94 on off dribble 3's. With Steve Kerr as your coach, it gives him a boost to a 99 on open shot 3's. With a pair of diamond Nike Kobe AD Mids (35,000 MT), his contested 3 goes to a 99 and puts him at a 98 overall.

I would recommend filling out his badges with defensive boosts (pick pocket, brick wall etc.) In catch in shoot situations this guy will make anything. With that shoe boost I mentioned above it helps Melo to a 98 with speed with ball. This will help you smoke defenders when driving to the basket. Melo also has a HOF Posterizer badge that will help you dunk on fools all day. The first game I had with this guy, I had over 30 points and 6 3's. If you're stretched at your SG spot and already have a decent SF, this guy would be a very good SG. Don't try using him as a PG or PF. He's not going to do you any favors in that role.

Use if: You want the best offensive weapon on all of 2K19 Myteam and want to cheese on everyone online.

Bottom Line: Costs around 600K-700K currently in day 3 of these packs and while I didn't pay that much for him, he's worth that....he's really that good. If you pull him in packs, consider yourself VERY lucky.

Nice review. can he guard players like pd lebron or kd?

He can guard PD LeBron just fine. He's super fast. However, it's Melo, his defense is juiced on this card but still gets exposed quite a bit by taller offensive players like KD.

Passing vision and passing iq don’t effect the players passing It’s a stat for the CPU .Only passing accuracy matters for the players actual passing abilities. He is great at point guard but otherwise great review

I more or less put that because I hate when people play non-PG's at PG.

Fully understandable we all hate it

I'm not a fan of his shot. He misses shots he should be making