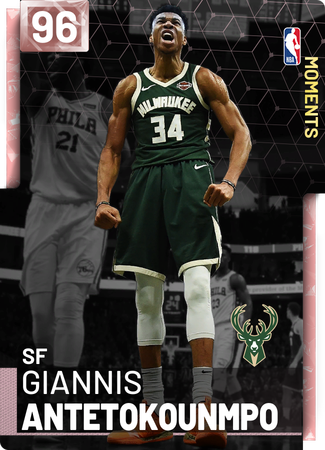 The scarce copy of the PD

Hi guys and good evening, today we're going to talk about the brand new Giannis PD 96 moments released yesterday, I decided to do this review not scheduled because after seeing the debate that was created between this and the 20th I felt compelled to do it and close it here. Hope you like it. Good reading!

Inside scoring: if you have against this player you just have to put Pippen against him to stop him, an indecent thing. Entering the area is child's play, you enter R2 + low lever and take free throws or badly posterize. Then with the HOF posterizer the opponent says Goodbye!

3pt shot: the 3pt shot statistics certainly does not leave you wanting. 79 from 3pt open, 74 contested and 72 in movement. Personally I like the release, it won't be one of the best, but I like it. He puts a lot of greens on it.

Playmaking: certainly in playmaking he knows his stuff, he has 86 ball control, 81 pass precision, 70 pass vision, 90 IQ pass passage and 90 ball speed. Switching with this player is the last thing you do, so don't take it too seriously.

Badges: has the same HOF tags as its counterpart (6): acrobat, one man fast break, lob-city finisher, relentless finisher, posterizer and chase down artist. Certainly the card that makes the difference is a deadly, fantastic posterizer and creator.

Animations: then, there is a lot to talk about here. Speaking of shooting animations, the shot is quite slow in the beginning, but then it takes a bit of speed. I really like it a lot. Speaking of dribble animations, as you know it has that inhuman crossover that takes 8 meters of space and takes a speed never seen before. Finally, talking about the dunks' animations are basic, but so powerful that they are really unstoppable.

Open shot mid-range: yes, exactly, it is a weak point. 77 from the average unmarked and 74 in motion and contrasted. Unfortunately it is very inconsistent and does not give you the security that gives you the PD of the 20th anniversary with 84. I'm really sorry.

Defense: defense is nothing. The statistics are not too good, the highest statistic is 90 of countered shooting and some 89, from the boys 65 of blocking you can't see .. What probably compensates to cover its little value statistics is the height of 6'11''.

Post control: this player in the post game does PENALTY. It is confirmed with a 68 fedeaway shot, 64 on the hook and 80 on post control a real crap compared to its counterpart. The animations in post are certainly not bad, but the statistics are certainly not good.

OPINION ON THE VERSIONS: now is the time to talk about the difference and who is stronger between the 20th anniversary version and this moments here, both PD. I consider the 20th strongest not only for the defense, but because every weakness I wrote in this review are strong points in the 20th, for example the 20th has 78 fedeaways, 74 hooks and 80 post control, so some shooting if you can afford it unlike the moments. In defense the 20th has +4 lateral quickness (not to be underestimated, one of the most important statistics) and well +13 of block, which from 65 passes to an excellent 78. Concerning the shot the 20th has -5 shooting from open shot 3 (74), -4 moving shot (68) and -14 contested shot (60). Regarding the rebound the 20th has -2 in the boxout (92) and in the offensive rebound (91), however I prefer to lose the of 2 to both to receive a nice +7 in the offensive rebound (82), which I consider much more important than a simple defensive rebound, when Giannis certainly does not take it because he runs like a lightning bolt on the break.

Use if: "if you want a player who still at this point in the game can still change your games and win."

Don't use if: "if you prefer cheese players, with cheese, in short, cheese

"Don't use if you prefer cheesy players" Surely that's a joke?

It's not a joke, this guy its not a cheesy player. He have only a good animations, but the jumpshot it's normal.

Surely you don't know how to us him effectively. This guy is insane

I presume you don't know the difference between a cheesy player in all and for all and a normal player with only good animations like Giannis Antetokoumpo. The cheesy player are: Kirilenko, Turkoglu (before the update), Fraizer Galaxy Opal, Worthy Galaxy Opal, all of this player have the cheesy base 11 jumpshot with the park animations, you understand now? I use Antetokoumpo with his fantastic crossover and go to the rim, the 3pt its the last thing I think.