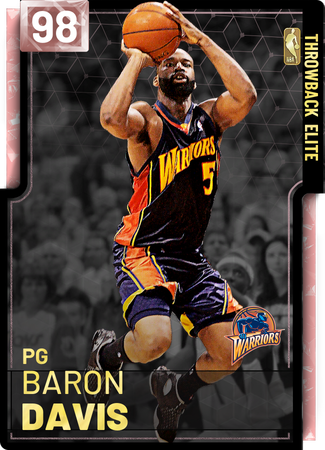 Extremely Fun Player to Use

-Badges: He has some of the best collection of hall of fame badges in the game. Only 6 other players in the game rn have both HOF limitless and HOF posterizer, a list that includes the limited versions of Vince Carter, Brandon Roy and Gilbert Arenas as well as PD Tracy Mcgrady Carmelo Anthony and and the Rewards JR Smith. All of those cards were incredibly expensive at the point where they were released and even to this day most are super expensive. The cheapest from that list (Limited Arenas) still isn’t BIN to this day despite being 6’3 (or at least he wasn’t last time I checked). Baron is a mere 45k already and will prob drop even more which is insane. He also has HOF pick pocket (which is super OP) the aforementioned underrated Acrobat, HOF Tireless Scorer (another one of the best HOF badges), catch & Shoot, and then a couple other that are nice to have but aren’t as important. I wish they gave him HOF Dimer or Difficult Shots for kicks too but you can’t get everything for 45k obviously.

Recommended Strategy: Drive 1v1, catch and shoot, pull up from Limitless Range, 3 point plays, some moving kids if you’re in a pickle

Other Comments: (optional) I’ve kind of reached the point in this game where i’m not Having that much fun even though I have a solid-ish lineup, and this card’s brought some of that feeling back. Against offball cheesers with Giannis at PG I keep Baron on the bench and run an all switch lineup exclusively of 6’9 or up players who can all defend really well, but against players who actually like to play the game, i move Baron to my starting lineup and call ISOs til he gets the Gatorade symbol. Super fun to use, but that’s partially because I have the luxury of not having to use him against cheesers.

Use if: You want to have fun at the game.

Don't use if: You’re offballing scum. An alternative i’d Suggest would be waiting on the main menu until the demo game shows up since you like CPU defense so much!

Let me know if you guys wanna hear more reviews, i’m Thinking of doing a review on a super super underrated TBE player that’s been in the game for a few months, a Series 2 cover player who’s being criminally undervalued, and esteemed Antawn “I have base 11 and 99 3 with a coach boost for no reason” Jamison after this.

More reviews please!! Appreciated it. Going to pick him up. This is the team I'm going for: https://2kmtcentral.com/19/lineups/308481/current-lineup

I only play offline as well

That looks like a solid lineup you actually also have the super underrated card I was referring to already too! Personally I don’t prefer centers that can’t stretch the floor but Walton could be good if you want to maybe experiment with a defensive switch lineup as well. Oh and Richie Guerin is a stud I loved him when I had him he’s basically upgraded Rex Chapman solid pickup

Hey. Very in depht and nice review. One question. You mentioned PD Gilbert. Should i sell my bench PG Baron Davis for regular Arenas or keep Baron?
https://2kmtcentral.com/19/lineups/328053/squad

The link to your lineup isn’t working for me :(
In general I think Arenas is prob slightly better because of base 11 but I personally have more fun with Davis (i’m Slightly biased as an OG warriors fan though so keep that in mind lol)

I ended up doing what i wrote. Here is my lineup. What do you think bout it?
https://2kmtcentral.com/19/lineups/330050/squad

should i sell my pd gilbert for him or no? i feel gilberts regular jumper is slighly too fast

BARON'S REALESE IS FASTER THAN WESTBROOK'S, BUT WESTBROOK HAS GOT BETTER DUNKS.
I WILL CHOOSE BARON JUST FOR HOF LIMITLESS RANGE

At least personally speaking, I don’t really see the point of having 13 players if you’re still building up your team, most people only play 10, so if you have 3 extra players you’re just wasting contracts by having them. I’d recommend selling a couple players and trying to save up for Josh Smith. Also, i don’t know what token set you’re on rn, but try getting the new Amethyst Ariza for sure.

Unfortunately unless you’re playing online, most players, both cheesers and even non cheesers are prob gonna score on your guards pretty easily, but if you can get around that, it definitely looks like a fun team.

thanks for the help im on amethyst rn so ill get ariza next and i would get josh but i play switch where you cant get many premium set players unless their the lower teirs.

just picked him up for 33k. holy shit he is good. he clamped up grant hill in one MTU game for me. worth every single cent