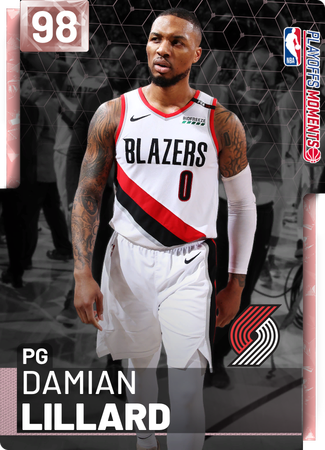 Fun but got Problems

Dame Dolla hit one of the most ridiculous shots ever to send Westbrick packing! This card is juiced in everything from his shooting, dunking/athleticism, speed/playmaking and even generous defense. From the stats alone this is one of the best guards in the game.

Other Comments: Simply, he is fun to use and you will like his shooting, playmaking, and dunking but the fact that he gets blocked and defense against forwards there will be issues and sadly that is what people are doing in 2K these days.

Use if: You want an athletic playmaking, shooting point guard

Don't use if: You want to use a taller point guard or any player taller than 6'5 at point guard

Bottom Line: Currently overpriced. I would pay no more than 300k max. Cheaper alternatives are PD Baron Davis, PD Russell Westbrook, PD Gilbert Arenas, PD Donovan Mitchell. All of those are options if you want to use a similar 6'3 guard who can both dunk and shoot. But again, in today's 2K thats not working against the cheesers.