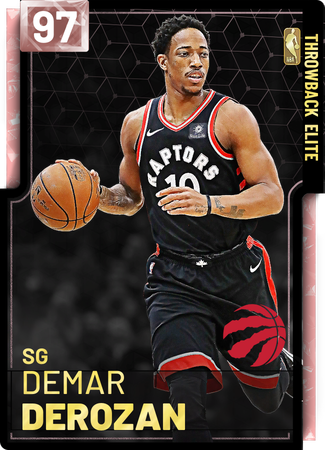 This card just dropped today, and he's already dumb cheap. I recently lost all my players in some weird scam shit that my dumbass fell for (can't say ik why, but all my PD's were gone (RIP)), and I've been fuckin around with my bench shooting guard (tried PD Victor (he's good, and nice inside, but his release is ai and his handles ain't the nicest). Thank the lord this DeRozan dropped today, because he's the answer to everything I've been looking for.

Recommended Strategy: Isolate often, catch and shoot, mid range pull-up, post fade (if you have like a 7-point lead it's a good shot, anything less and it's a gamble), pick and roll/fade (he can play either role).

Use if: You want a cheap top tier athlete who can shoot from outside and contribute on defense

Don't use if: You need a marksman from deep

Bottom Line: Insane player for his price. Absolutely worth a cop. All I can say about this card is, "Wow."

Release is actual cash. One of the best I've used.

Personally it's one of my favorites. If you've used Tracy McGrady or Amy Walter Davis, it's the same as theirs. It's normal timing.

what badges would you recommend for him?

Tbh any badge that he really needs he pretty much has on HOF. Ig DR-Deadeye would be a fine badge to add. If you really wanna slap limitless on him then power to you, it just doesn't exactly match his game. If you have any badges in particular you're considering adding feel free to mention them.

wow only 33k thats a must get

Great review. Trying to decide who to buy, him or clyde. Who has the better jumpshot and could you like compare them a little?

You got it man. I've used them both, and they're both excellent cards. Clyde will dunk it more often than this Derozan, but his release is not nearly as good. Derozan has one of my personal favorites, so I'm a little biased. If you care more about defense you should take Clyde, as he's a far better defender. If you want easier offense, go with this Derozan.

I know Clyde is considered better, but i'm on a tight budget

I have pd Clyde, and he is a beast. I run him, pd Blake, and diamond Marc Gasol for triple threat online. I have enough mt to get demand right now, so would he be a good fit with Clyde and Blake? What’s your opinion? Do I get him?

You need to get rid of gasol, and get either Davis Robinson or run Clyde, Demar and Blake

Ok. Thank you for the tip.

That’s what I would do too