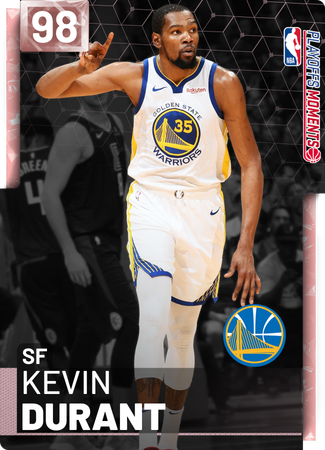 What's good everybody. This is ReviewsForThePeople and I am back again with another review on one of the best cards in NBA 2K19 MyTeam, the 98 overall playoff moments pink diamond Kevin Durant. You guys got to 10 likes on my comment, so I have to deliver my promise for you guys. Now, this Kevin Durant card, based on my gameplay, is a must-cop card in NBA 2K19 MyTeam and I am here to discuss why. As always, I try to keep my reviews as professional and high-quality and possible. I am basing my review today on 3 games of MyTeam Unlimited and 2 games of Triple Threat Online and I was running him at the shooting guard and small forward positions. So, I hope you guys enjoy this review and I hope that this review helps you guys to make a proper decision on whether or not to purchase this card in NBA 2K19 Myteam. Without further ado, let's get started with today's review.

Recommended Price: 275-325,000 MT (Most likely will be cheaper than that eventually)

Takeovers: His only two takeovers are sharpshooting and shot creating. I don't believe that there is a specific coach that changes his takeovers.

Is He Worth It?: I personally don't think that he is worth what he is going for right now, which is around 650-700,000 MT. I do believe that he is worth anything below the 300,000 MT mark. He is definitely one of the best all-around cards in this game and he is very dominant with his dual takeovers, which are sharpshooting and shot creating. He is a slashing and shooting machine with incredible defense and unreal animations. I definitely think that this card is a must-cop and don't be surprised if his value drops and this card is on every god squad that you go up against in NBA 2K19 MyTeam. I don't think that he will get cheaper than maybe 250-300,000 MT anytime soon, but I can assure you that he is definitely worth that price. Bottom line, this is definitely a 10/10 card and I would highly recommend that you pick him up when his price balances out in the next couple days to a week.

Thank you guys so much for taking the time to read my review on the new 98 overall playoff moments pink diamond Kevin Durant. I hope that this review has helped you guys to make a decision on whether or not to purchase this card in NBA 2K19 MyTeam. If you guys enjoyed reading the review, please be sure to hit that like button for me. If you want to see more high-quality, professional reviews from me on the newest cards in the market, make sure to hit that follow button. If you have any questions about the card or feedback for the review, please feel free to message me or leave them in the comment section below. Again, I hope you guys enjoyed reading this review. I am ReviewsForThePeople and I am signing out. Have a great Monday and a great rest of your week!

Hey guys. This is for the noti gang. Thank you guys so much for reading my review. If you guys liked the review, drop a like. If you guys want to see more reviews from me, make sure to hit that follow button. If you have any questions, concerns, or feedback, feel free to message me or leave them in the comment section below. Thank you and have a great rest of your week!

Great review as always, it is very pleasant to read. I mainly focus my reviews on cheaper cards but might break the bank for this card. My team is pretty much set apart from a dominant SF. Grant Hill didn't fit the mold (insane at the 1 though) and Lebron feels a bit clunky.

I appreciate that, my guy. To be completely honest, for my playstyle, I feel like Grant Hill would be a similar shooter, better slasher, and a better defender than KD. But, I definitely think KD is unique because of his sharpshooting ability.

I agree on the defensive and slashing part but the fact that KD can pull up from anywhere is one of the most OP attributes in the game (similar to PD Tmac). I tried his other PD (ASG not the anniversary) and found that he can get in a shooting motion almost instantly even while being tightly guarded. I might keep Grant as my back up PG and play KD as my main scorer

another great review. should i still get him if i have the 20th anniversary?

I believe that you should sell your KD and be patient for the new one's price to drop. You can still stell your KD for at least 400,000 MT at this current moment of time.

I noticed you don’t make a direct comparison to the 20th Anniversary Durant, which most people are wondering about as am I. And you sidestep the question when asked directly. Do you not have the 20th Anniversary? If not it’s ok bro, just good to be upfront about it

Cool. No offense brotha. Plus 20th Anniversary rarer cuz of people locking in for Blake. Thanks for the review

No, don't worry about it, my guy. No offense taken lmao. Yes, the 20th anniversary is going to become rarer by the day.

https://2kmtcentral.com/19/lineups/361621/any-suggestions-i-have-8k-rn great review, you have any suggestions for my lineup?

You're good on everything, except for Trae Young. You need to get rid of that card immediately. Yes, he's an amazing shooter, but he's a liability on defense and his size doesn't amount to anything really. Other than that, I think your lineup is solid.

who would you recommend for under 70k, id prefer someone who can shoot and has hof dimer

Oh, 100% Magic Johnson. If you could save up a little bit more than 70k, you can pick up the one with the USA jersey that can shoot consistently.

Do you think I should sell PD Giannis for him?

I enjoy these reviews even though I know I’m not gonna get the card lol. But there’s definitely reviews that help me with purchasing cards and have a big impact on if I buy the cards

Thanks, my guy. I appreciate that. Sometimes, I can't even afford the cards myself, so I hit up some good friends of mine that pull packs on the regular and I use the cards if they pull them. So, don't discourage yourself just because you can't afford players like KD.

Ayyyyy I can afford him now

Hi I have a question, is there much of a difference between this KD and the other one

Which KD are you talking about specifically? If you are talking about the diamond KD, yes, there's a major difference and that's in the hall of fame badges, mainly the shooting ones like limitless range, difficult shots, deep range deadeye, etc.

I think he meant the 20th anniversary one

Oh, then not as much. There isn't much of a difference between the two cards, but I can bet that the new KD will be much cheaper than the 20th anniversary one because he will be in packs for months. Also, you are still technically paying for that little bit of an upgrade, so I feel that it's worth it.

Thanks very much, my guy. I appreciate that.

would you recomend this card, pd granger, or pd kirilenko

PD Kirilenko has absolutely unreal defense. all hall of fame badges, 99 steal, etc. I practically only play triple threat online when I play myteam (I'm a park player at heart) but I run Kirilenko at the 3. For the most part he can hold his own on defense against natural bigs, and he can keep up with any small forward. Insane at ripping people too, but my park experience has really helped me to know when a player is most vulnerable for a steal. Shooting and release is fantastic too, but you're gonna have to put limitless and deep range deadeye on him. I've never played with PD Granger before so I can't say anything about him, but the kd is also nice. I run him at the 2 in tto. RFTP is 100% correct when he says that KD's defense is better than his stats suggest, although he's also correct when he says that KD is not quite as good at ripping people. He's much faster than the Kirilenko, especially with the ball. It's really a matter of personal preference. KD is someone that you'd typically give the ball to and create his own shot, and Kirilenko is more of a spot up catch and shoot guy, especially considering that Kirilenko's step back/moving hesitation is absolutely horrendous

Is he worth upgrading from the 97 KD? I love the 97, but he has a kinda slow post fade animation that I know is not his regular version. Also, can you tell the +5 advantage in speed with ball for this card over the 97? Also, would you rather 98 KD or the new AK? Thanks

I find him to be inconsistent for some odd reason. Got him for 20k snipe

I just bought this card for 25k on Xbox One with a diamond contract and shoe. This market crash has been stupid.