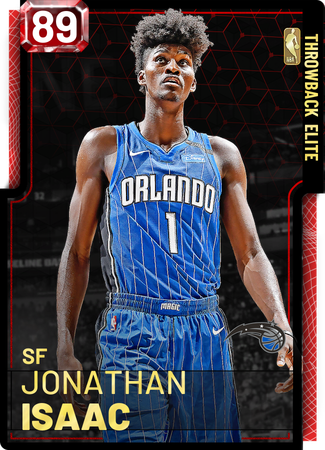 First Review Bought this guy for one reason. He's the budget Giannis (was also a budget beast in 2k18)

-Inside Scoring: 95 driving and contact dunk with the tendencies to go with him. He will easily get to the rim with speed boosting.

-Shooting: He has an 85 open mid and 3 pointer with a silky release. Run pick and pop with him and he will shoot open shots given the fact he has 2 Giannis Antetokounmpo's as his arms.

-Defense: He is a great Rim protector because his arms are really long just like Shaq's cock. Any shot that goes up gets smacked into the 9th row. He has chase down artist. He is also a great perimeter defender with a 92 steal and long ass arms. He's like Scottie Pippen mixed with Giannis

Recommended Strategy: 1 v 1 speed boosting and get to the rim. Pick and Pop to shoot open shots.

Use if: You want a budget Giannis. Run him at point guard if you are the devil.

nothing is as long as shaq's cock fml

Tell me bout it