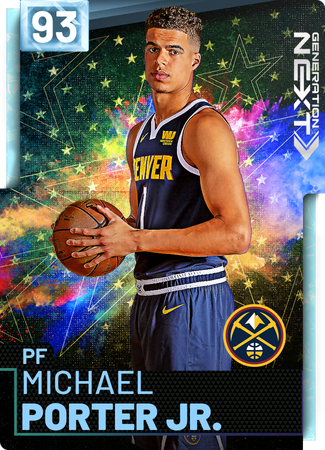 This card is ideally for the 'budget ballers' but has the caliber of competing with the top cards in the game. Long story short, he is a demigod that can be runned from the 1-4. Essentially, this card is a must cop.

Recommended Strategy: a do everything card besides posting up, although can post fade

Use if: you want a demigod that's under 50k. He's essentially the budget Simmons in this set. Don't be surprised if you see him at the 1 since he has HOF PnR Maestro.

Don't use if: You require lockdown defense

Bottom Line: Incredible value for money, a must cop for all types of teams. Although equip diamond shoe to make him 94 overall for dual takeover, his Takeover is currently Slashing.

I currently use him in this lineup -- My lineup looks to counter all the lineups in the game at a reasonable price. This is essentially my "no money spent squad"

Dude you have to add one MAJOR STRENGTH and that is his dribble move set. It's a park ISO dribbler's wet 6'10 dream!!!

The Jordan speed with ball shoes are 50-80k on PC. The cheapest shoe on PC is the converse at around 20k buy now.

This is a good comment to note then regarding PC players. The prices I based them off on are on console, for me specifically (XB1). Although, I'd assume the prices to be rather similar on PS4.

Yeah, we have strange pricing, PD Danny Granger is 19k on this system but the cheapest shoes are 35k bn.

Should I start him over Diamond Laurie Markkinan

You can start porter, however I'd consider that matchup you're going up against. If you're going against a smaller pf like a kirelinko or jamison definitely match them up with porter as those cards would burn past markkanen. However, if your opponent runs a bigger matchup that is lethal in the post switch lauri to the starting for that game as he would be a better interior defender and rebounder. Alternatively, you can start both! As porter can run from the 1-3.

Would he suit my current lineup.
https://2kmtcentral.com/19/lineups/450258/my-current-lineup

If I were you I'd run him at the 1 or the 2,starting lineup. Kemba wouldnt be my first choice unless you're a big fan of him. I'd also upgrade the mj to the other diamond version

Jaren Jackson Jr. is better at the 4 spot due to his strength, size, and defense. Atm, I'd personally run porter at the 3 or the 1 due to a wave of people running centers at the 4.

But mpj release is waaay better. pretty sure it's gotta be kristaps release, or as close to it as you can get. My fav release in the game. So if you want 3 pt shooting from your pf, you might check it out.

Valid argument. However, I found way more success using jaren at the 4 as his release doesnt seem too bad when running 3 pt plays that involves him. Offensively, jaren is more flexible in the post especially against offballers. I'm not saying porter is worse than jaren but for the pf specifically I'd take jaren as a better matchup against most 4's in the game. Porter imo is dominant from the 1-3 as the matchups would favor him. When running porter at the 4, he became a liability on the boards and a weak interior defender against top tier pfs/c's with post stats. Imo I'll take defense over a release as I've dropped a base 11 cards like jamison and granger due to the fact they were not "lock down" on defense.

I have both. Porter is notably better

Best diamond in the game