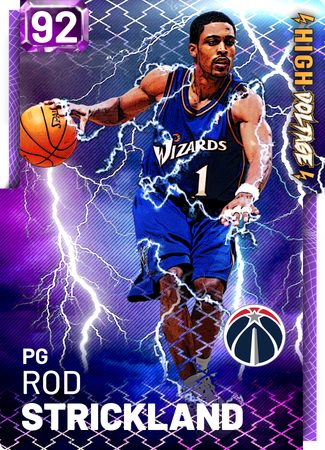 With the release of these new High Voltage cards, there was a massive market crash. Seeing as this card is a 92 overall and was going for an average of 16k on PS4, I decided to give him a try. Here's what I think after 5 games played.

Use if: You want an athletic guard who can drive, dribble, shoot, and facilitate consistently, and are on a budget.

Don't use if: You want a guard who can jam on players like Westbrook, or Baron Davis.

Bottom Line: Easily a top 5 guard in the game. If you know dribble moves, you'll have a field day against opponents. Best guard under 20K in the game right now.

Personally, I feel as if all pg's struggle with stamina this year due to them constantly fighting through screens.

Definitely, screens are the main focus on offense this year so having guards fighting through them constantly drains them quick.

I think the stamina problem is because of reaching. I reach a lot and it lowers stamina.

Is 10k mt with a diamond contract worth it for this guy off the bench?

Sorry for the late response, hope you got him! A diamond contract in itself is about 20-25K so yes most definitely. That's about 35-40K worth for 10k.