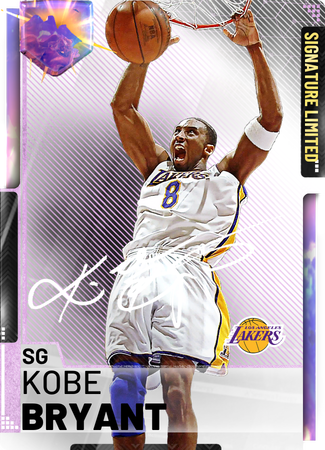 I'm just going to cut to the chase in this review. This card is absolutely raw. Kobe "The Black Mamba" Bryant. Even though this picture makes him look like a slightly injured orangutang, the card is no joke. 99 in every. single. stat. As you can probably imagine, this card dunks on just about anyone this side of the river Jordan with the full fury of an 800-pound python. If your opponent gets smart and puts Manute Bol at SG to guard and sets up camp in the paint to avoid the barrage of slams, fear not! Manute will tumble to the ground like 7 feet 7 inches of flimsy twigs once his 99 dribbling, 99 speed, 99 acceleration, Hall of Fame Ankle Breaker, 99 swag, and 99 leg sleeve game are done with him. And let's not forget his 99 rated lawyers to get him out of sexual assault allegations. Honestly, there isn't really much to say about this card other than that it is un-fricken-believable, but what did you think it was going to be? It has 99 IN EVERY STAT and 30 HOF badges. Your only hope in the world after knowing that this card exists is that there are only 82 of them in the whole damn world. Let's just say I will not be playing my friend who pulled him in any wagers any time soon.

Acquired By: Bribing an insanely lucky friend by promising my soul, my first-born son, and some cookies.

Recommended Strategies: Just do anything. It'll go in I promise. Also, don't let him near any hotels if you find a time machine and travel back to 2003

Other Comments: Big shoutout to my friend Mike for pulling this man and letting me use him. What a legend

Don't use if: You don't have him. This is a pretty simple one.