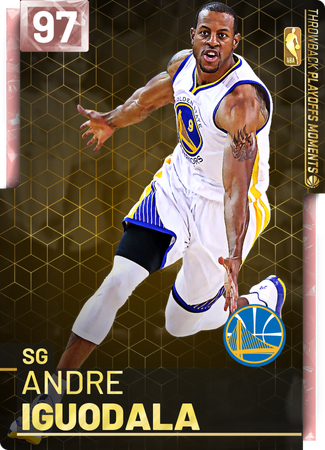 Andre Iguodala is already a star on my team and I've only had him for a short amount of time. With a pretty star-studded roster of cards like PD Danny Granger, PD Kevin Durant, and Diamond Porzingis, he stands out as the one who can do it all. A great all-rounder with massive upside. Oh, and he is CHEAP for a Pink Diamond, especially one of his caliber. I'm not personally a Warriors fan but I love Iggy and this card is great.

Recommended Strategy: Use a playbook with lots of three point plays, get the ball moving, have him run off of screens. Or, iso, sauce up your defender, get to the rim, and dunk on the whole team. Also, put Iggy on the other team's best wing, trust me, not even Danny Granger or Hedo Turkoglu can get a shot off over Iggy. HE. HAS. CLAMPS.

Don't use if: You need a post scoring, rebounding presence. If that's what you need, 98 Hakeem is only like 47K.

Bottom Line: A phenomenal wing with the ability to be ran at point guard. Able to do a bit of everything and is a star among stars. One of, if not, the best card in the game under 60K MT

The best comparison I could make would be a slowed down KD release. Like if you made KD's release in the jumpshot creator and put it on 3/4 speed.

Yea. Realized that when I was playing, I brushed up against someone and the badge popped up. I was like 'shit, gotta change that now' Fixed now tho

You don't need to be a GS fan to like Iggy. He's one of my favs of all-time, since Philly.

Not sure on 1st ballot. Depends on who else is there. Def agree though, he's a monster

This is my team. Some advise will be helpful.
https://2kmtcentral.com/19/lineups/103460/baronkings