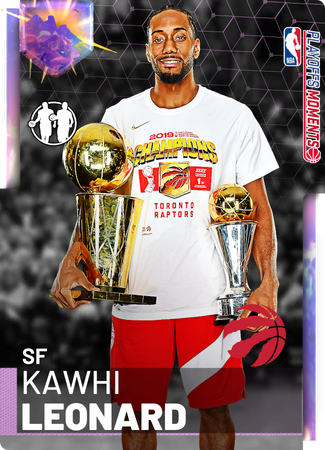 Intro: Following his previous GO version, this Kawhi card bring 180 stats points more. This is just a crazy upgrade. He's definitely living up to his reputation as a clamp god, but the only thing that actually matters in this endgame discussion is his release. Let's see what this card has for us.

Stats: 4416. There's just nothing left behind besides a bit of playmaking. His rebounding is crazy good for his position, although it won't matter much. But his scoring/defending/athleticism is just the best of the best in NBA 2K19 MyTeam.

Competition: His size makes him pretty unique for a SF, but he's in the like of PG13, LeBron. Considering him at the SG position, I would probably not use him instead of upcoming GO Durant. He's an alternative to GO Melo and GO Clyde, with emphasis on defense rather than on shooting (sorry I don't consider kobe/mj - due to no 3pt play - and slower players alternatives at the 2).

End game: Tough to say if he belong in your 13 man squad. I do believe that he does if you run plays. If you play with an anarchic game style, a faster shooter will be more suited. I would not pick him up over PG13 though if the price difference is too big.