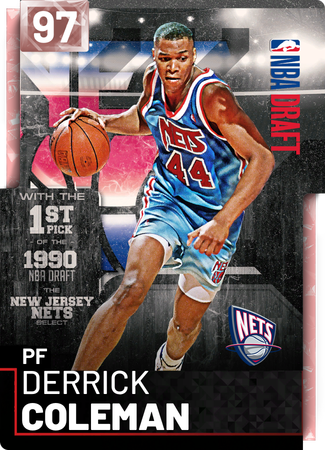 I was searching for a power forward for my team that could hold its own matchup on defence while stretching the floor on the offensive end. I don't open packs very often, but I decided to open one single and managed to pack him. I am going to base this card on the MTU and Domination games I have played using him. He may not stick out visually compared to other cards in this NBA Draft collection, but that does not mean that he's a bad card in any way.

Standing Shot 3pt: 94 - Has 4/5 of hotspots from three-point range. With D'Antoni coach boost, D.C has a 98 rating. Equipped with HOF Corner Specialist, Catch & Shoot, and Pick & Popper and gold Deep Range Deadeye to complement his shooting. He has been especially good from the corners for me.

Release: Normal speed, shoots left, and easy to time. When he shoots, he is a bit elevated off the ground, so it's harder to contest his shot. His base is set shot 14 and upper release is 29. Took me a couple of tries to time it perfectly in freestyle mode. Has a nice peak in his shot, giving a good window to green his release.

Defence: With HOF Defensive stopper and Rim Protector, he is a very dependable defender. Although 6'10 may be considered a below average 2K height at the four, he was able to contain players using centers at the four spots: Opal Marc Gasol, PD Bill Russell, and PD Patrick Ewing. His 98 strength is really noticeable when players try to back him down in the post. I notice when D.C is defending off-ball, he is very good at boxing out his matchup preventing any easy post-ups at the block or offensive rebounds. Does not read the passing lanes or strips the ball a lot but is very good at contesting the shot hands up without fouling.

Post Scoring: I was not specifically looking for post-scoring in my power forward, but he is very effective at creating his own shot in the low post. He comes with all the necessary badges at the HOF level: Dream-Like up & Under, Drop-Stepper, Post Spin Technician, Bruiser, Tireless Scorer, and Difficult Shots. His post fadeaway is a little low on the release but is very easy to time to green.

Takeover: When he is hot, he has a default dual-takeover of glass cleaning and sharpshooting. This further makes him a better rebounder and lethal shooter.

Moving Shots: Has very low moving mid-range and three. Even though he has HOF difficult shots, I would not recommend creating shots with him off the dribble.

Playmaking: Not a passer or dribbler and is not equipped with any playmaking badges. He is not a point forward. Even though he is equipped with gold One Man Fast Break, I would not recommend going coast to coast with 48 ball control and 69 speed with ball. Has 98 hands, so he is able to receive passes fine.

Dunking Animation: His dunking animation is limited to generic big-man dunks. Has one standing dunk where he slightly cocks it back so it could possibly be blocked from a defender behind.

Other Comments: I would slap the limitless range badge on him and use a coach that can boost his three-point rating up to further make him a knockdown shooter. He should be around the 5kish MT range but I can't tell exactly with the terrible auction house situation currently.

Use if: "You want a reliable two-way stretch four"

Don't use if: "You need a point-forward or slasher"

Bottom Line: "Great value for money, nice role-player to surround your stars with."

No he sucks dumbass