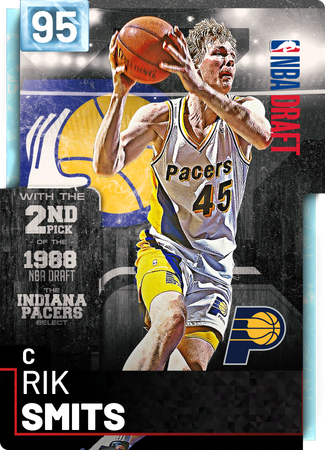 Hello everyone this is my first ever review so if you would like to comment suggestions that will be greatly appreciated. Rik Smits is easily the best budget card in all of my team. He is such a huge body and is unmatched by all centers and he has even dominated opal Yao twice. He is my go to player off the bench and easily drops 20-25 ppg for me. ive played 10 unlimited games with him.

-Smits size is the biggest advantage standing at a staggering 7ft 4' which is absurd.

-Rik Smits is one of the best defenders in the game in my opinion due to his mixture of size and athleticism. He is a block machine and can guard even the most athletic centers due to his 79 lateral quickness and size.

-Rik smits rebounding is unbelievable and he has never got outrebounded by anyone. He gets every single defensive board no matter who he's against and gets a fair amount of o-boards.

-He has a great midrange at a 95 which feels like a 99 because of how easy his jumper is to green.

-He also feels very fast which is weird for a center who only has 75 speed.

-His post game is extremely strong because of his badges and his ability to shoot the ball over smaller defenders.

-A blatant weakness is clearly his three ball which is only a 40 and has never made a three for me and I have attempted at least 15.

-His post fade is also not very good this is because he has a low release point which causes the defender to get an easy contest.

-He also has very low ball control which means he cant speed boost and leads to the opponent getting easy steals if you hold on to the ball for too long.

Recommended Strategy: Use him in the pick and pop for an easy midrange, post up smaller defenders and just lay it up over them, run a pick and roll and throw up a lob which always leads to easy alley oops.

Use if: You want a huge center who is a beast on defense, gets every board, has an unbelievable release, and can dominate most centers in the post

Don't use if: You want a center who has an amazing 3 pointer and can speed boost

Bottom Line: Rik is the best budget player in the game period and everyone should pick him up due to how cheap he is.

Word Smits is soooo good and shuts down everyone. This is a great review and does a great job of breaking him down.

Agreed he is a beast. Great review thx bro