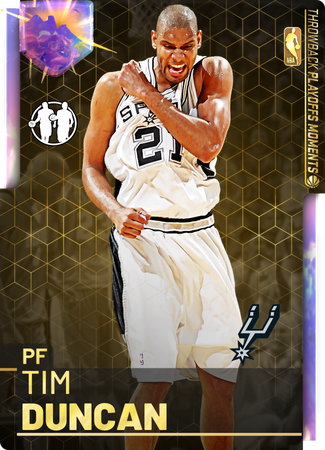 I managed to pack all the new Spurs Opals somehow (1 twenty box and 1 ten box), and this Timmy is by far the best one. Tony P is a pretty great scorer from everywhere (especially inside (draws tons of fouls and eludes big men)) but giant point guards fuck his shit up. Tbh Manu is my least favorite just because his release is rather slow on a two guard (dunking and defense upgrades from the PD are nice tho). But let’s get back to Duncan

Recommended Strategy: Do your work w Duncan down low, whether that be in the post or under the basket. Involving Duncan in screens is the best way to get him buckets of all sorts. Roll for the aforementioned paint plays, and fade for an easy mid range or possibly open 3-ball. Defensively he’s got everything taken care of.

Other Comments: If anyone wants to argue w me about why Tim Duncan isn’t the greatest power forward of all time, I’m happy to discuss in the comments lol.

Use if: You love Duncan, or enjoy a 4 that can dominate both ends of the court.

Don't use if: You’re short on money (he’s like 200k) or prefer more of a sharpshooter.

Bottom Line: This card is most certainly a gauntlet (and his 23 HOF badges help out too lol). Worth a starting spot on any team, and fuck 2K for shafting so many people w these auction house problems, server issues, and laziness.

To do a bank shot aim the stick towards the hoop

Nope. No argument here Lol. Definitely the best PF of all time.

Him or Opal KG?

My guy this was last year

Damn you had me the in the first half ty ig man.